The staff at Needtovent has a long-standing appreciation for the little oddities that continue to comprise a unique, interesting portion of baseball history. For example, we previously reported on the plight of Joe Pignatano who will forever be remembered most for his being the only major league player to ever hit into a triple play in his last at-bat. That's a pretty unfortunate way to end an otherwise respectable major league career. 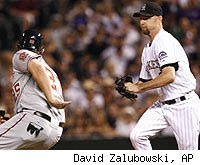 On a more positive note, Colorado Rockies pitcher Alan Embree accomplished something that is about as rare as anything found in America's Pastime: He threw zero pitches against zero batters but was still credited as the winning pitcher in a recent game against the lowly Washington Nationals. This has to be hands down the easiest win in major league history.

It was the top of the eighth inning and the game was tied 4-4. Austin Kearns was on first and there were two outs. That's when Embree came in to relieve Joel Peralta, but luckily for him the Nats poor play extends beyond hitting, pitching and fielding to include baserunning as well. Before even getting the opportunity to throw a pitch, Embree tossed the ball over to first and caught a sleeping Kearns between first and second base. Kearns was tagged out. Embree exited the game for a pinch-hitter hitter in the bottom half of the inning and the Rockies scored to take the lead. Reliever Huston Street then took the mound and closed out the ninth to seal the victory for Embree.

Yep, zero pitches thrown, but a big "W" nonetheless. Go figure...
Posted by Robert A. Nowotny at 8:36 AM