LAND OF THE DEAD 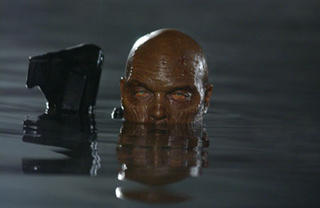 I call your attention to just two lines of dialogue in George A. Romero's latest Zombie Zeitgeist -- LAND OF THE DEAD.

Make no mistake, Romero is a filmmaker who consistently manipulates a message with his mayhem. Ruthlessreviews.com was perhaps the most succinct of all previous reviewers in revealing this trait. In NIGHT OF THE LIVING DEAD, for example, we were presented a pitiless commentary on the sixties' self-immolation on the fields of Vietnam and the streets of the American South. DAWN OF THE DEAD was a savage attack on America's Me Generation which transformed far too many of us into a nation of mindless consumers. And now, in LAND OF THE DEAD, we are forced to examine ourselsves as an increasingly fractured, paranoid culture that more than ever seeks the erection of barriers (metaphorical, actual and linguistic) to keep under control our perceived enemies -- whether they be terrorists, Mexicans, secularists or simply the poor.

Romero's not too distant future finds the wealthy elite living together in a barricaded country club-like high-rise called "Fiddler's Green" whose logo looks eerily like Enron's. Although the residents no longer have a golf course to go to, this Callaway clad community goes about their daily lives ignoring and isolating themselves from what used to be the middle class and those beneath. Yes, wealth and privilege provide the illusion that the outside problems can never penetrate the expensive and expansive security they have implemented. These Neocons are alive medically; they are not alive spiritually.

As for the masses, we find them clustering at the foot of the Tower seemingly content to scrabble for crumbs and immersed in the mindless activities provided to them as an opiate against enlightenment. If you keep telling ex-soccer moms, NASCAR fans and Wal-Mart shoppers just how good they have it, they will eventually believe the mantra. And so all is "safe" and relatively secure until the zombies arrive.

Political and social commentary notwithstanding, LAND OF THE DEAD remains first and foremost a zombie flick -- a category of cinema that was by no means invented by Mr. Romero, but one that he has excelled at thus developing a well deserved cult following. Budgeted at a mere $15 million, one cannot help but marvel at the production values. This man knows his business as does Michael Doherty whose razor-sharp editing deserves special mention.

If you can stomach the guts and gore, then LAND OF THE DEAD is definitley worth seeing. If, however, you want to experience a truly classic and frightening zombie film, then I strongly suggest I WALKED WITH A ZOMBIE. You can read my review at www.needtovent.com. This 1943 black & white classic directed by Jacques Tourneur and produced by Val Lewton remains the benchmark for the genre.
Posted by Robert A. Nowotny at 7:52 AM