The End of the World as We Know It

by Robert A. Nowotny

The Smackdown. Klaatu and Gort are back in the 'hood thanks to the mega-budget re-make of "The Day The Earth Stood Still." The duo arrives once again with every intention of helping Mankind save itself. Thanks to the executives at Twentieth Century-Fox we will have their message delivered on over a thousand screens, including some IMAX theaters, firmly placing this film among the bigger holiday season releases this year. The studio's marketing department spared no cost in hyping this remake, and why should they? (I've seen more promos for this film than Bowflex commercials the past month or so.) Certainly the overall production budget, especially the CG and special effects costs, is reportedly very impressive, while the cast, which includes Jennifer Connelly, Kathy Bates and, surprisingly, John Cleese, help compliment box-office star Keanu Reeves who plays Klaatu in the role that Michael Rennie made famous in the original. Everything seems in place to assure a strong opening weekend turn-out. But can all this money and contemporary talent add up to make this new "The Day The Earth Stood Still" as enduringly memorable as the old "The Day The Earth Stood Still" that graced the world's screens in 1951? There's nothing to be gained by standing still -- so lets get to it. Here's the intergalactic Smack... 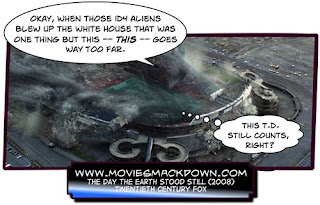 The Challenger. The talent behind this new 2008 "The Day the Earth Stood Still" is certainly respectful of the original. Director Scott Derrickson, producer Erwin Stoff and screenwriter David Scarpa have all publicly commented on how they understand that the earlier version is an acknowledged classic. And they fully realize that, generally speaking, remakes are about as successful as a Libertarian running for office in the Lone Star State. (An aside: We hope Kinky will run for Governor again -- "Why the hell not?") They also understand that, on rare occasions, a remake actually fares pretty well against the original. "Sorcerer" compares favorably with "Wages of Fear," for example, as does "The Magnificent Seven" with "The Seven Samurai" and "The Birdcage" vis-a-vis "La Cage aux Folles." Accordingly, the number of deviations from the earlier edition have been held to a minimum. Gort is now a biological form and not a mechanical robot. Likewise, Klaatu is now an alien in a human body, not an alien with a human body. And, of course, the balance between story and special effects, between character-driven moments and action sequences, has been skewed as well, reflecting the advances in filmmaking technology and, presumably, present-day audience preferences. Being the challenger against a movie that most sci-fi affecinadoes consider to be sacrosanct, the equavlaent in its genre to what "The Godfather" is to gangster movies, is a tough undertaking. But then again, a beagle did win at Westminster... 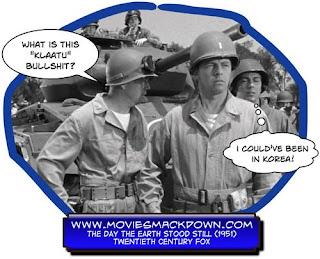 The Defending Champion. This is arguably the greatest science fiction film of all time. Don't take my word for it -- none other than the Library of Congress and the National Film Preservation Board agree since the original "The Day The Earth Stood Still" was selected for inclusion in the National Film Registry as one of America's most significant cinematic achievements, one that "continues to have enduring cultural, historical and aesthetic significance." This distinguished honor is not only well deserved, it is also a fitting tribute to a great filmmaker, Robert Wise, who set out to defy convention and to author something truly special.

"I wanted to make the picture as real, as believable and as honest as I possibly could so that whatever happened from outer space would blend smoothly into something with which everyone could identify. My goal was to make a movie rather than a science fiction movie per se."

To accomplish this, Wise concentrated on telling a rather simple story of an alien humanoid and the circle of ordinary people with whom he comes into contact. Additional credit must go to Edmund H. North, the terrific screenwriter who also brought us the Adademy Award-winning screenplay for "Patton," and, of course, to Harry Bates upon whose short story the screenplay is based. The net effect is a powerful, thought-provoking viewing experience which strikes a responsive chord with virtually everyone who sees it. Michael Rennie stars as Klaatu (in a role originally written for Claude Raines), and his superb performance as the distinguished extraterrestrial messenger is both convincing and chilling. The always reliable Patricia Neal and Sam Jaffe (in his last role during the McCarthy era) more than hold their own as well. Throw in an evocative musical score by Bernard Hermann, solid technical credits throughout, and a scintillating pace thanks to the streamlined story telling, and the original "The Day The Earth Stood Still" remains a champion, even in this post-Matrix world.

The Scorecard. The very best science fiction films accurately reflect the tenor of the times in which they are produced. In the case of the original "The Day the Earth Stood Still," we find an audacious allegory for the 1950s chilling concern over the escalating tensions of the early Cold War era and nuclear proliferation. And it hit home by placing the onus on all of mankind, not just the feared Ruskies, but on every American as well. This central theme, where humanity is portrayed as having an inherent inability to restrain from destroying itself, continues in the 2008 edition. As Director Scott Derrickson stated in a recent interview, times have changed and he felt the underlying story structure behind "The Day The Earth Stood Still" would allow him to comment on today's overriding fear -- that being mankind's current path to destroying itself by destroying the very planet it lives on. Heady stuff for both filmmakers, and the Smackdown winner will undoubtedly be the one that succeeds in getting their message across the best.

The Decision. Keanu's Klaatu is a solid interpretation of the well-known alien messenger coming from afar. Mr. Reeves is well cast and certainly holds his own when compared to Michael Rennie. Ditto for Jennifer Connelly as Helen Benson. She's an excellent choice in this critical role -- one that is expanded in importance from the character played by Patricia Neal -- and so this was a critically important casting decision that worked to perfection. Likewise, John Cleese (surprisingly, in my opinion) pulls off his supporting role as Dr. Barnhardt. I'd give a slight edge to Sam Jaffe, but this is a minor quibble not worth arguing about. And when it comes to Gort, the 2008 version is bigger, more versatile and more imposing than the original. Think LeBron James vs. Charles Barkley -- I think Nike needs to sign this new, improved Gort to an endorsement contract right away.

Alas, there is one area where the remake (or "reintroduction" as some have called the new "The Day the Earth Stood Still") does not fare so well. I'm referring to the critically important underlying ability to convince the viewer that what he is seeing is realistic, that the events portrayed on the screen could actually happen today, tomorrow, or next Tuesday. That was part of the magic which made the original such a classic. Audiences then, and even now, are drawn in, almost magically, by the excellent screenplay, the flawless direction by Robert Wise and the limited number of special effects which, for the time, especially, were totally believable. Derrickson's direction and Scarpa's script are more than competent by all standards, but they just don't equal the seamless, thought-provoking, visceral storytelling found in the 1951 version. Few films do, and so this is not so much an indictment against the new DAY as it is to say the challenge to equal the original was a gigantic one, even by intergalactic standards. But it is really the special effects which fail to impress. I don't know who the hundred or so folks are that are credited with the various CG and (supposedly) high-tech visual imagery -- maybe they are names pulled out of the Rancho Cucamonga telephone directory -- because what seems blatantly apparent to me is that the biggest scenes, the destruction of the 18-wheeler and Giants Stadium in the Meadowlands, for example, were actually the work of Julian Beever and the Ohio Art Company. For those of you who don't know what I'm referring to, Mr. Beever is the sidewalk artist who has become famous on the internet for this 3-D sidewalk chalk paintings, and the Ohio Art Company is the maker of Etch A Sketch. See if you don't agree -- Beever drew the requisite matte paintings and then the almuninum powder from a giant Etch A Sketch wipes the image away. O.K., maybe this is an exaggeration, but there's no denying the 2008 version of "The Day The Earth Stood Still" deserved better.

The winner, of course, is the 1951 "The Day The Earth Stood Still" -- but in a decision closer than many experts predicted.