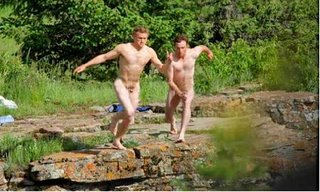 BROKEBACK MOUNTAIN is an extremely well crafted motion picture that is worthy of almost all of the Oscar attention it received.

Director Ang Lee has mounted (no pun intended) a beautiful production. His directing is a marvelous example of telling a story straightforward (again, no pun intended) without the use of any annoying gimmicks or cinematic tricks. The music by Gustavo Santaolla is spot-on perfect; it is evocative and haunting and it will stay with you a long, long time without ever becoming too flashy or intrusive. Quite simply put, this is what film scoring should always strive to accomplish, yet so rarely even comes close. In addition, the screenplay by Larry McMurtry and Diana Ossana is a pure gem -- these writers took me to a place I have never been before. I don't mean geographically, but emotionally, and they accomplished this by creating two exquisitely-drawn characters whose shoes I will never walk in, but who I have come to better understand. Yes, there's no question that all four were deserving of the Academy Awards they received.

And what about Randy Quaid? He has recently dropped his lawsuit seeking more money for his role as Joe Aguirre. In this reviewer's opinion, Randy's pathetic performance is the only flaw in an otherwise nearly perfect movie. Whatever he was paid, it was too damn much.

I know quite a few individuals who refuse to see this film because of its underlying subject matter. I understand and respect their decision. It is unfortunate, however, since BROKEBACK MOUNTAIN is the best love story since BRIDE OF CHUCKY ("Chucky Gets Lucky" was that film's hip tagline -- one of my all-time favorites).

All kidding aside, I hereby award BROKEBACK MOUNTAIN 4 1/2 Dingleberries on a scale of 5. It doesn't get much better than that...
Posted by Robert A. Nowotny at 10:25 AM