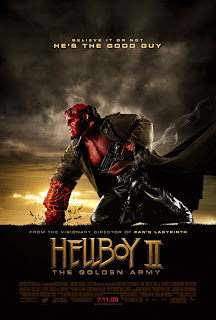 (A quick note to NASCAR fans everywhere -- HELLBOY II is not a film about Kyle Bush. As for all residents of New Braunfels, Texas -- HELLBOY II has nothing to do with the second born male child in the Reininger family.)

Based on the comic book by Mike Mignola, HELLBOY II is cinema fantastique at its finest. The opening scenes find Professor Trevor Bruttenholm (John Hurt) reading a rousing fairy tale to his adoptive son, Hellboy (Ron Perlman). Seems that back in ancient times there was a brutal war between humans and everyone/everything else -- monsters, goblins, trolls, the Tooth Fairy, just about every frightening creature that surely inhabited the dark recesses under your childhood bed.

Eventually a truce was declared; the humans were given the right to live in the cities and the trolls et al were given the forests. As time went by, however, the humans reneged on their end and began building shopping malls, parking lots, subdivisions and Starbucks everywhere. With this unabated encroachment, evil Prince Nuada (Luke Gross) defies his father (the reigning king) and pledges to declare war utilizing the Golden Army, a fighting force of enormous mechanical warriors 70 times 70 in number. The only thing standing between him and his ability to awaken these slumbering behemoths is his sister, Princess Nuala (Anna Walton), and she needs help. Lots of help. 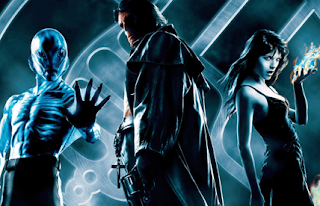 Yes, mankind's defense rests primarily on the abilities of Hellboy, his girlfriend Liz Sherman (Selma Blair), his best friend, Abe Sapien (Doug Jones) and other associates employed by the Bureau of Paranormal Research and Defense. As the taglines for the film state, saving the world is a hell of a job and, believe it or not, Hellboy is the good guy.

Thanks to Director del Toro, Cinematographer Guillermo Navarro, Production Designer Stephen Scott and a highly talented special effects crew, HELLBOY II is the best big budget film of the year. All $72 million is where it should be, on the screen, and while the movie is extremely entertaining throughout, two scenes in particular stand out.

The incredible Troll Market makes the extraterrestial cantina on Tatooie look as outright boring and bland as a Baptist barbecue in Bulverde. Director del Toro's unique and vivid imagination bombards the screen with a breathtaking beastiary that one needs to see over and over again if all the imbeded nuances are to be discovered. What a treat, I've never seen anything quite like this -- and I've been to a flea market in Ponca City. 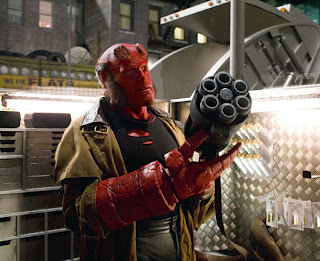 The other fabulous scene finds Hellboy and Abe in drunken reverie serenading one another. You'll never hear Barry Manilow's "Can't Smile Without You" again without recalling HELLBOY II...and doing so with a great big smile on your face. This is an unforgettable scene that will surely take its place in cinema history along with other memorable movie moments like the campfire scene in BLAZING SADDLES or Slim Pickens riding the atomic bomb in DR. STRANGELOVE or the passage of the ocean liner in the fog in Fellini's AMARCORD. Having said this, please remind your Uncle Bob to steer clear of Tecate Light.

A final comment: The dialogue in HELLBOY II is blessed with an abundance of humor and wit (caustic and otherwise). Many of the best lines have already been mentioned in other reviews ("I know; I'm ugly!"), but our favorite has to be: "I'm not a child, I'm a tumor!"

I don't think we have ever heard that before. Not even in Roe v. Wade...
Posted by Robert A. Nowotny at 5:55 AM