LOOKING FOR COMEDY IN THE MUSLIM WORLD 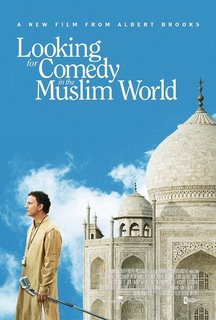 "Why is there no Halloween in India?
Because they took away all the Gandhi."


Albert Brooks is no Mel Brooks; nor is he the "West Coast Woody Allen." However, Albert Lawrence Einstein, the brother of Bob Einstein who is best known for his "Super Dave Osbourne" character, can be funny...sometimes.


Brooks' LOOKING FOR COMEDY IN THE MUSLIM WORLD is a brilliant premise for a movie. In fact, it is just as brilliant as any 2-carat diamond in the Wal-Mart jewelry case -- but, in the final analysis, it is just as flawed.

Brooks' deadpan delivery and hyper-worried persona is perfect for the lead character. It should be -- after all Albert Brooks plays himself. Chosen for a special assignment, Brooks is asked by the State Department to go to India and Pakistan to find out what makes Muslims laugh. Of course, the fact that India is only 13.4% Muslim (less than the gloabal average which is 20%) just highlights the ineptness of the entire mission. Not only is Brooks clearly the wrong guy going to the wrong country, once he's back he must turn in a 500-page report indicating what he has learned along the way.

Brooks ultimately learns nothing. Sadly, we as an audience learn nothing as well, unless it is the fact that any extended scene which goes nowhere can and will bring a film's narrative to a dead stop. In the case of LOOKING, it is a painfully boring and ill-advised audience-participation improvisation that seems to last for an eternity.

Yes, Brooks bombs, and often they aren't smart bombs either. I will, nonetheless, recommend LOOKING FOR COMEDY IN THE MUSLIM WORLD because it dares to take a chance and to clearly break the mold of traditional, predictable and brain-dead Hollywood fare. In fact, if all you watch is the opening scene with Penny Marshall it will be well worth the price of admission (or a DVD rental).

Albert Brooks almost always appears in the films he writes. He does so because he quickly learned that once a screenplay is approved for production, there's no one lower on the totem pole than the writer. Hence, this famous quote from Mr. Brooks: