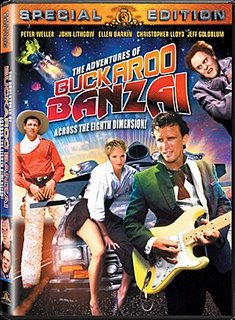 A devoted Needtovent reader recently sent us an article appearing in "The Wall Street Journal" which began with the intriguing headline: "Film's Know-Nothings." The author of this essay, Joe Morgenstern, lamented the fact that "today's filmmakers know very little, and care less, about the real world. Their movies derive from other movies."

Morgenstern goes on to declare that "the shallow careerists of contemporary Hollywood, fixated by whatever seems to be selling at the moment and striving to sell more of it...ultimately produce and direct movies that are made of interchangeable, recyclable and utterly disposable parts."

This phenomenon is not all that new. Over the years I've personally run across scores of film projects being described along the lines of "This script is a cross between THE BLAIR WITCH PROJECT and PEE-WEE'S BIG ADVENTURE" or "GODZILLA meets LOLITA". Another commonly used short-hand description is the verbal-pie-chart, i.e. "It'll be one-third BROKEBACK MOUNTAIN and two-thirds WEDDING CRASHERS."

It is a shame. It is a damn shame.

While much of the blame must go to the recent spate of film school graduates who know their cinematic shorthand, but who haven't lived or experienced or learned much from real life vs. reel life, it should be pointed out that many studio heads are equally as guilty. Two examples follow; the actual names of the executives are withheld because I'm still trying to keep a career going. (Tsk, tsk, it isn't polite to laugh so loudly).

Example Number One -- Frank Q. Dobbs loved to tell about the time he pitched his script titled KLONDIKE to a very well known studio mogul. During the course of a full thirty or so minutes Frank described in detail how each of the central characters were lured to Alaska during the Klondike Gold Rush in an effort to strike it rich. The treacherous Chilkoot Trail was highlighted, along with many other references to the actual historical events which took place in 1897-1898. It wasn't until Frank mentioned a steam engine that the executive suddently stopped him and asked, "Is this a period piece? We don't do period pieces at this studio." Frank was promptly shown the door.

Example Number Two -- When I went in to pitch a project based on W. Somerset Maugham's novel, THE MAGICIAN, the studio guru opposite me asked in all seriousness, "Maugham, Somerset Maugham, should I know that name?" My meeting was fleeting to say the least...

Despite this myopic miasma, every once in awhile a truly unique, totally surprising film comes out of Tinseltown. My favorite example is THE ADVENTURES OF BUCKAROO BANZAI, the truly offbeat movie once described as "a silly film for smart people," starring Peter Weller, John Lithgow, Ellen Barkin and Jeff Goldblum. How BUCKAROO BANZAI ever received the green light from a major studio defies all logic, even to this day.

Perhaps an even better example is the incredible body of work from Terry Gilliam, the only American-born member of Monty Python. In addition to that troupe's wonderful films, Mr. Gilliam has individually brought to the silver screen a number of non-traditional, creative, entertaining and thought-provoking cinematic triumphs including TIME BANDITS, BRAZIL, THE FISHER KING and TWELVE MONKEYS, among others. Yes, this Python ex has given us a full monty of stunningly original movies. We should be thankful.
Posted by Robert A. Nowotny at 12:09 PM