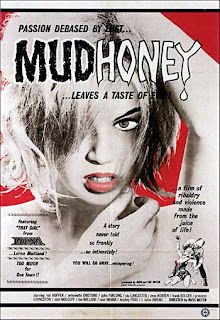 Think you've seen it all?

How about murder, rape, arson, sexploitation, depravity, mob violence, religious fervor and cleavage, lots and lots of cleavage, all "extracted from the juice of life" and presented in truly gorgeous black and white by none other than "King Leer" himself?

Step aside Tarantino and Rodriguez, you guys have yet to equal the raw emotion, the debased lust or, especially, the wondrous beauty of the female form found in Russ Meyer's notorious MUDHONEY.

This is delectable decadence for all D-cup devotees. Too bad it was shot in Voyeur-Vision and not in 3-D IMAX. Wouldn't that have been something?

But MUDHONEY is much, much more than what first meets the bulging eye, particularly after the first act which engulfs the viewer with some of the most strident close-ups to ever assault the big screen.

The underlying story is an intelligent, complex morality tale with surprising depth. Calif McKinney (John Furlong) is a drifter on his way to California during the Great Depression. He finds himself stranded on the outskirts of Spooner, Missouri, penniless and in desperate need of a job. He hires on as a farmhand where he falls in love with Hanna Brenshaw (Antoinette Christiani), the gorgeous wife of one of the most sadistic screen villains ever.

Hal Hopper is remarkable as the violently demented Sidney Brenshaw who terrorizes just about everyone in sight -- especially Hanna. When Sidney realizes his wife will no longer tolerate his physical and sexual abuse he employs Brother Hanson, the local fire and brimstone preacher, to enlist the fine, upstanding citizens of Spooner to lynch Calif. Ultimately the plan backfires and Sidney suffers a particularly gruesome demise.

Meyer succeeds in showing how one man's evil can bring an entire community down to his level and onto the brink of unthinkable insanity. The dangers of blind faith, mass hypocrisy, religious fervor and emotionally-driven extremism have rarely been presented in a more stirring, visceral way.

When initially released in 1965, audiences would literally stand up and yell at the screen, cheering for Calif and Hanna while booing Sidney and Brother Hanson. When did you last go to a theatre and experience that kind of reaction? 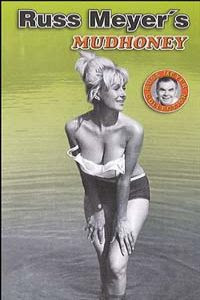 The entire cast is stellar. As previously mentioned, Hal Hopper's performance is unforgettable, he literally steals the film with his agonizing, slow decent from belligerent drunk to raging lunatic. Frank Bolger, as Brother Hanson, is nearly perfect in his punitive pulpit portrayal as is Princess Livingston in her role as Maggie Marie, the nearby brothel owner. You haven't seen a character like this since Tod Browning's FREAKS.

And no review would be complete without mentioning Lorna Maitland and Rena Horton who play the brothel's buxom vixens, Clara Belle and Eula. Rena has been rightfully called "the embodiment of the body," so be sure to watch for the introductory scene of the deaf and dumb Eula. Talk about splendor in the grass...

Some believe that cult status can be earned overnight or even bought. For example, NAPOLEON DYNAMITE was immediately declared a "cult classic" by Fox Searchlight Pictures. This unwarranted attempt at fame rightfully failed. Clearly it is not the distributor or their marketing department or even the filmmaker himself who can convince the public that a particular motion picture deserves cult status, only audiences and time can do so. It is here, within this time-honored classification, where the true spirit of innovative, risk-taking, independent filmmaking thrives. Russ Meyer may have passed away in 2004, but there's no doubt his unique, singular voice lives on through such engrossing films as MUDHONEY, a legitimate cult classic.
Posted by Robert A. Nowotny at 9:00 AM