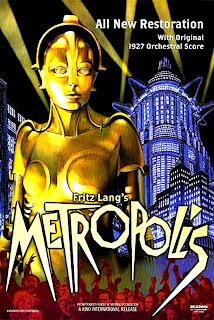 METROPOLIS is the mother of them all -- not only is it the first science fiction epic to grace the world's theatre screens, it set the standard for futuristic imagery that has not been surpassed even to this day. Utilizing a stunning mixture of Germanic Gothicism and Art Deco, Director Fritz Lang's vivid vision of a future dystopic world where the urban proletariat workers must live and toil underground continues to haunt viewers today just as much as it did upon its initial theatrical release in 1926.

Taking almost two full years to shoot and utilizing over 37,000 extras, METROPOLIS was produced on a scale that staggers the imagination. It is a cinematic classic set in the distant future, where the splendid skyscraper city of Metropolis is divided into two distinct castes: the workers, who toil in the gloomy underground and go drearily about the chore of running machines that power the city; and the elite, who inhabit the gleaming towers of the surface world and live a life of luxury. Two groups of citizens, separate from one another in physical space and social influence, where one works and has little wealth while the other has wealth and does little or no work.

When a beautiful young girl implores the son of the Master Industrialist that the subterranean workers are "his brothers," it is feared that she is a threat to the order and security of the status quo. A crazed inventor is ordered to build a robot in the girl's likeness and a convoluted plan to quell any surging hope for a better, more equitable life for the underground laborers backfires. The ensuing revolt destroys much of the city. In the end, however, labor and capital join hands to make a better place for one and all.

Director Fritz Lange's plea for human dignity is inexorably tied to the social climate of Germany in the mid-twenties. It serves as a cultural mirror of a time and place heavily influenced by the horrors of the First World War, when Victorian infatuation with mechanical progress became fouled with the massacres and inhumanity created by the industrialism that produced conscript armies where millions died in front of machine guns and tanks and flame throwers and other mass-produced mechanized instruments of destruction. Back then scientific progress was usually measured in terms of productivity, not on mankind's betterment. Sadly, things aren't much different today.

Over eighty years later, METROPOLIS remains a thought-provoking cinematic experience; a timeless warning against fascist tyranny, communist oppression and capitalism run amuck. As the closing of the film declares, "There can be no understanding between the hand and the brain, unless the heart acts as a mediator." A simple missive from a previous age of anxiety. It was true then. It remains true today.
Posted by Robert A. Nowotny at 12:42 PM