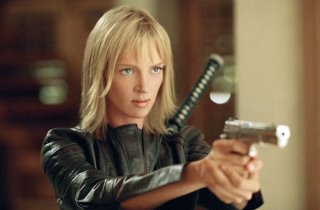 Quentin, as in Tarantino, is the director of both these films and a man glaringly in need of some editing skills. At two hours and sixteen minutes KILL BILL Vol 2 is at least ninety minutes too long. It's o.k. for a filmmaker to indulge himself a little, but Quentin has abused the privilege. To make matters worse, most scenes develop so slowly it is like experiencing a 45-rpm record being played back at 33 rpms. To be honest, I cannot recall any other motion picture that even comes close to being so painfully s-l-o-w.

Rather than kill the guy my suggestion is to incarcerate him -- yes, let's lock him up with all of the editing manuals ever printed, let's allow Thelma Schoonmaker non-conjugal visits on a weekly basis and let's keep Quentin imprisoned until he is certifiably reformed. The final step is to provide a rehabilitated Mr. T the opportunity to repay society with a new film that reflects his new-found understanding of an important concept commonly called "pacing." This seems like a win-win situation all the way around.

Quentin incarcerated in Editing 101 prison? Why not? Movie audiences can surely get by "Sans Quentin" for awhile and this might just save a career whose feature film debut was the explosive and sensationally savvy RESERVOIR DOGS which broke new ground in contemporary, cutting edge, cutthroat cinema. Throw in PULP FICTION and you obviously have a filmmaker with inherent talent; yet over the years there has been a decline and fall, not only of western civilization, but of this once promising darling of film critics everywhere. Early, well deserved success has obviously led to bigger budgets, bigger disappointments and a baleful, ballooning hat size. With an ever-growing ego rapidly approaching the magnitude of the Hindenburg, I truly fear Quentin's head may explode sometime soon.

(Out of respect this recent "head shot" was downsized using state-of-the-art computing technology provided by the Krell technicians at Altair IV. It was the only way we could successfully reduce Mr. Tarantino's super nova noggin to a dimension that would fit on the internet)
Posted by Robert A. Nowotny at 7:31 AM