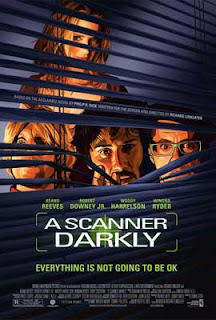 I've long had a secret desire to yell "FIRE!" in a theater, but have refrained from doing so because of the repercussions. When A SCANNER DARKLY opened in 2006, I missed my chance -- movie patrons were fleeing this self-proclaimed dystopian miasma en mass within the first ten minutes. Oh well, I'm sure Robin Williams will be releasing another film sometime soon and so I'll probably get at least one more opportunity.

Austin auteur Writer/Director Richard Linklater is the man responsible for adapting Philip K. Dick's semi-famous novel that focuses on the cyclical nature of addiction and the erosion of individual privacy in a suburbia just around the corner. Heady stuff, indeed. Surprisingly, Mr. Linklater misfires more often than a 1970 Ford Torino in Chama, New Mexico. This is quite unexpected since Linklater is unquestionably one of the most talented filmmakers around; by far the best residing in the so-called Live Music Capital of the World.

Well, no one is perfect. 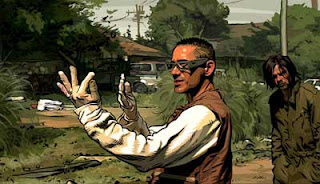 The film stars Keanu Reeves, Robert Downey, Jr., Woody Harrelson and Winona Ryder whose likenesses were altered via an interpolated rotoscope technique that must have been developed by Roto-Rooter. This is the same annoying special effect used in the deplorable Charles Schwab commercials which ran a year or two ago. At least Chuck's TV ads only lasted sixty seconds; A SCANNER DARKLY plods along at 100 minutes. This may not sound like much, but you would swear this is significantly longer than the gestation period for a rogue elephant.

A key ingredient within the underlying story is a drug referred to as "Substance D" because it induces "dumbness, despair, desertion and death." Except for the "death" part, this pretty much describes A SCANNER DARKLY. If you're looking for a satisfactory head trip, you best look elsewhere...Chama, perhaps, where the smoke in the air isn't exclusively from the Cumbres & Toltec Railroad.

An aside: One of the first rotoscoped Charles Schwab commercials featured Suzanne Savoy, a close friend, a terrific actress and an even better person. Should any casting directors happen to stumble across this posting I sincerely hope they will consider Suzanne for their next project. One can do no better.
Posted by Robert A. Nowotny at 12:24 PM