Review by Robert A. Nowotny 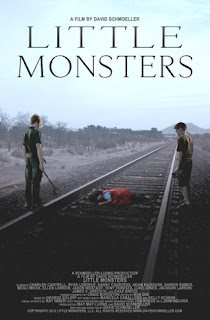 Writer/Director David Schmoeller showcases his exceptional versatility in his latest feature film, a riveting drama inspired by the true story of the senseless, horrific murder of three-year old James Bulger in the United Kingdom. While this event occurred back in 1993, and only one child was killed, the recent events at the Sandy Hook Elementary School in Newtown, Connecticut make LITTLE MONSTERS one of the must-see movies of 2013.

Yes, the body count is just one innocent pre-kindergarden youngster vs. 20 elementary school students and six adults (not counting Adam Lanza and his mother), but one key facet of the story is that the perpetrators of this unconscionable act were children themselves, each only ten years of age.

Carl Withers and James Landers were not especially bad boys. We learn that Carl felt tormented by a dysfunctional mother, but nothing in his past nor James' would suggest that one day these boys would decide to randomly kidnap a child on a whim. And nothing in their past would forewarn that shortly thereafter the toddler would be bludgeoned to death, his corpse left lying on a railroad track outside of town.

The kidnapping and murder occupy only the first few minutes of this film. The emphasis, instead, is on the release of both killers once they have turned eighteen years of age. Given new names and identities, Carl and James are released back into society with the goal of both, totally independent of one another, to become productive, law-abiding citizens. But society deems that nothing is more heinous than the murder of an innocent child, and there are those who will devote themselves to track down both teens with an eye toward extracting unfulfilled “justice.”

What makes LITTLE MOSTERS such a relevant and compelling film is the remarkable insight Schmoeller provides regarding the two parolees, those who are devoted to tracking down their whereabouts, and the American public in general.

For Carl, the transition to freedom is a difficult endeavor. James copes better, but he also continues to harbor demons which may never be fully overcome. While each embody a radically different point of view concerning the past and their present circumstance, the most surprising development is that, once reunited, they are destined to battle each other more than their pursuers.

Schmoeller's script and direction are once again top notch, as is the casting of Charles Cantrell, as Carl, and Ryan Le Boeuf, as James – both are extremely convincing in difficult roles. In fact, all of the actors are excellent, as is the Cinematography of Craig Boydston, the Editing by Ben Zuk and the Art Direction by Maricela Caballero and Kelly Schenk.

Several years ago Worldfest-Houston, perhaps the only truly independent film festival remaining in the continental United States, declared, “See what films are made of when they aren't made of money.” With a reported budget of only $15,000, Schmoeller once again confirms the power of cinema to enlighten as well as entertain when, in skilled and determined hands, passion trumps pennies.

Unlike the bulk of American Cinema, LITTLE MONSTERS does far more than merely indulge; it asks questions. Important questions. Questions that weigh heavily on the mind of most Americans, especially now. Questions that are not limited to the killers, nor the indefensible act of murdering helpless children, but also questions regarding society in general and the legal system in particular.

But one question remains paramount: Will you make the effort to see LITTLE MONSTERS?