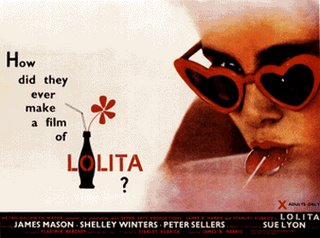 
Based on Vladimir Nabokov's "famosum opus", the incomparable Stanley Kubrick was the first director to tackle this provocative, controversal and eminently entertaining best seller. This was not an easy undertaking, especially in the repressive social and sexual climate existing in 1962. As the movie's official tag line declared, "How did they ever make a film of Lolita?"

This was pretty hot stuff, indeed, especially in the early sixties. Nabokov even remarked that to bring his work to the screen it might very well require that they "make Lolita a dwarfess." Thankfully, that did not occur.

Over 800 young girls auditioned for the title role, including Tuesday Weld, but the part was ultimately handed to Sue Lyon. Her vulnerable portrayal as the yummy nymphet evokes uncontrollable stirrings in Professor Humbert Humbert, brilliantly portrayed by the often-underappreciated James Mason. Prof. Humbert is so smitten by this vixen he resorts to marrying Lolita's mother just so he can be close by and cop an occasional sniff. Alas, Humbert soon realizes that his marriage to Charlotte Haze is a stiff price to pay.

Shelley Winters plays the porkish Charlotte with typical verve. Trust me, this is one female you want to stay away from -- her insufferable smothering is Everyman's nightmare.

And so Prof. Humbert finds himself in the middle of opposite ends of the spectrum in lovely, luscious Lolita and the sexually cannibalistic Charlotte whose web is being woven ever so tightly.

And things get even worse thanks to the arrival of the marvelously malevolent pervert, Clare Quilty. Peter Sellers, in one of his earliest multiple-character roles, nails the deranged humor embodied in the novel by improvising much of Quilty's dialogue (a high honor from Kubrick). It was this collaboration which later led to another pairing of Kubrick and Sellers -- DR. STRANGELOVE -- where Sellers once again mastered several diverse characters in what is arguably the best Cold War comedy of all.

LOLITA -- Forbidden fruit but Everyman's dream. A wonderful film by a master filmmaker and filled with innuendo such as this overlooked line of dialogue illustrates:

Charlotte, speaking to Clare Quilty in an early scene: "Lolita's going to have a cavity filled by your Uncle Ivar."

There was no mention of a dentist...
Posted by Robert A. Nowotny at 7:42 AM