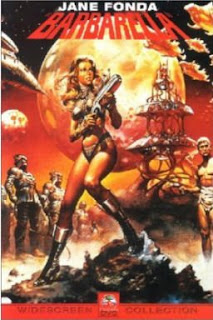 BARBARELLA is more than a tale of two titties.

With rich guys like Elliott Spitzer and Max Mosley having such well-publicized, decadent fun the staff at Needtovent decided we needed to find something to lift our spirits as well. With severly limited funds the best we could afford was a bowl of Jiffy Pop, a bottle of cheap tequila and a rented DVD of BARBARELLA, the 1968 cult-classic adaptation of Jean-Claude Forest's risque comic book starring Hanoi Jane before she become a McCain in the ass.

One thing is certain, Lady Jayne Semour Fonda sure made us all want to "see more."

Dildano: "Are you typical of Earth women?"
Barbarella: "I'm about average."

If only this were true. Clearly the world would be a far more attractive place, especially when one realizes that the fetching wench parading on screen in a fabulous series of revealing costumes was already thirty-one years old when this film was made. 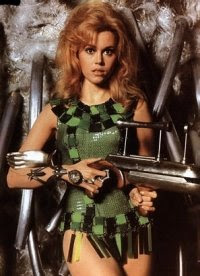 Playing a sexy, yet innocent space-age heroine in the year 40,000 A.D., Jane gets herself into a never-ending array of highly unusual situations. Luckily, none of these requires her to wear much clothing. During her journey to the city of Sogo (clearly a reference to Sodom and Gomorra), Jane meets, among others, Dr. Ping (Marcel Marceau), Pygar, a blind angel (John Phillip Law), an evil queen (the lovely Anita Pallenberg) and Durand-Durand, a mad scientist (Milo O'Shea) whose name served as the inspirational source for the 1980's mega-successful music group Duran Duran (who dropped the hyphen and a "D" at the end for some unknown reason).

One of the most interesting concepts found in the film is the idea that sex in the future is performed through the consumption of a drug while simply holding hands -- the good old fashioned way being deemed too "inefficient" by the fascist followers of the Protestant Work Ethic. Besides, there's a whole lot of profit in sex pills for the drug companies and they have extremely powerful lobbyists. Wait -- did I say something about the "future?" Seems to me the future is already here to an alarming degree. 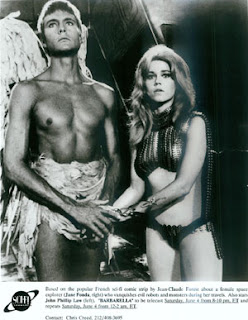 This film, flawed as it might be, has a lot of highlights that make watching it a guilty pleasure. Among these:

The opening credits where vivacious Jane does a striptease in zero gravity.

The scene where semi-nude women sit around a hookah inhaling "Essence of Man" -- which is revealed to be a fine-looking fellow floating in a giant fish bowl.

The overall art direction which is so cheesy it had to come from Wisconsin -- a spaceship constructed of shag carpeting being just one example.

A torture machine that "orgasms" its victims to death. Hey, I wonder if Howard Stern has had this device on his show yet. 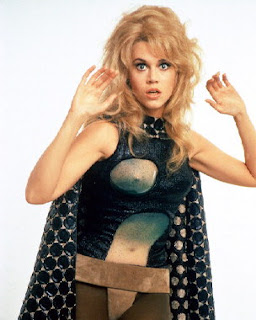 Here's the bottom line -- BARBARELLA remains saucy, naughty and bawdy forty years after it was originally released. It's an hour and a half of hallucinatory hi-jinks and softcore titillation. One could do far worse; the soon-to-be-released SPEED RACER being just one example that comes to mind.

(If your persuasions lean towards more serious decadence, then we recommend THE NIGHT PORTER. Talk about room service!)
Posted by Robert A. Nowotny at 7:14 AM