In À rebours you will find these fevered imaginings about an image of Salome in a Moreau painting:

"No longer was she merely the dancing-girl who extorts a cry of lust and concupiscence from an old man by the lascivious contortions of her body; who breaks the will, masters the mind of a King by the spectacle of her quivering bosoms, heaving belly and tossing thighs; she was now revealed in a sense as the symbolic incarnation of world-old Vice, the goddess of immortal Hysteria, the Curse of Beauty supreme above all other beauties by the cataleptic spasm that stirs her flesh and steels her muscles - a monstrous Beast of the Apocalypse, indifferent, irresponsible, insensible, poisoning."

In case you are not familiar with À rebours, (translated into English as AGAINST THE GRAIN or AGAINST NATURE), it is a fairly famous novel written by Joris-Karl Huysmans that was first published in 1884. In fact, it is widely believed that this is the "poisonous French novel" that leads to the downfall of Dorian Gray in Oscar Wilde's THE PICTURE OF DORIAN GRAY. 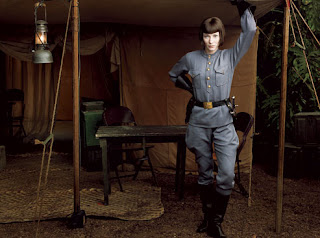 Which brings me to the recently released INDIANA JONES AND THE KINGDOM OF THE CRYSTAL SKULL. Surprisingly, super-star director Steven Spielberg missed an excellent opportunity to introduce a new, alluring, enduring femme fatale. At 5' 8 1/2," and with measurements reported to be 33-23-33, Cate Blanchett (as Agent Irina Spalko) certainly has the physical assets. Too bad they are totally hidden beneath the Cold War Ruskie fatigues she is forced to wear. What a waist (pun intended). In what is otherwise an extremely well-crafted motion picture blessed with first-rate art direction and production values, I simply find it disappointing that Agent Spalko, a ruthless, renegade Russian revanchist revolutionary won't be joining the ranks of the ravishing, rapacious reprobates immortalized on the silver screen.

For the record, Steven, I am referring to "mis-leading ladies" like:

Angelina Jolie's Captain Franky Cook. There's no exposed flesh here either, but the 5' 8" Jolie's 36C-27-36 frame couldn't look better. And as I said in my review for SKY CAPTAIN AND THE WORLD OF TOMORROW, seeing her with an eye-patch allows me to scratch off #67 on my "Things I Really Want To See Jolie Do Before I Die List." Dreams do come true. 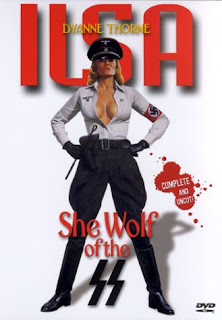 And let's not forget the terrific "Teutonic Titwillow," Dyanne Thorne, as ILSA, SHE WOLF OF THE SS. Like Ms. Jolie, Dyanne trained with Lee Strasberg where she (and her wardrobe mistress) obviously learned how to best show off her 37D-22-35 measurements. All that and a Ph.D. in Comparative Religion to boot.

Herr Spielberg, these are just two examples of what I am talking about; there are literally dozens more that come to mind. But I gotta run now, it's time for my daily spanking...
Posted by Robert A. Nowotny at 8:24 AM