Thanksgiving is a very special day, indeed. Most of us don't have to go to the office. There's usually a pretty good football game or two on the tube. There's plenty of turkey and dressing and cranberry sauce and, of course, gravy. One can never, ever have too much gravy.

And often there's family. Every holiday has it's downside—the Norman Rockwell insanity of it all. That's why I'm extremely happy to be spending the day quietly, at home, with just Lynda and a bottle of wine or two and my trusty remote for the boob tube. Ozzie and Harriet we are not.

We are, however, card-carrying members of that flourishing American subculture known as Bad Film Fanatics. Bad films made by bad filmmakers. But for Thanksgiving I declare bad is good, or at the very least bad is zany or outrageous or astonishing or hilarious, and so on this special day I would like to personally give thanks to my Top Three Turkey Producers from Hollywood. A trio of motion picture personalities deserving of some holiday punch and all the trimmings.

William Castle -- Ever since the beginning of the film industry movie moguls have searched for dramatic technical innovations that would increase the audience appeal of their productions. Some of these advances—such as sound in 1927 and Technicolor in 1935—permanently enriched the potential of the medium. Castle, bless his heart, was a low-budget producer/director whose “Percepto” process was but one of several cinematic contrivances he is credited with inventing. Ah yes, “Percepto”—this daring (or should I say derriere-ing?) gimmick is something I personally will never forget. 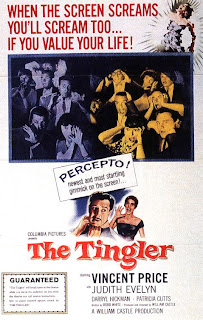 The year is 1959, and the Saturday afternoon matinee is Castle's “The Tingler”. “Brought to you in Percepto!” the ads declared. In fact, this movie was so scary that part of the price of admission went to a life insurance policy (a copy of which was given to you along with your ticket). At eleven years of age I'm already a little apprehensive, but armed with a giant tub of popcorn and a large Dr. Pepper to keep me company, I take a seat and learn that “The Tingler” is a creature created by Vincent Price that “breeds a living organism in the victim's spine, which, if not nullified, will shatter the vertebrae” and thus cause a horribly painful death. The only way to “nullify” the thing is to scream at the top of your lungs.

Big deal. But then I see this monster enter a neighborhood theatre (not unlike the one I'm sitting in), it passes through the lobby (presumably without buying a ticket) and then the screen in MY theatre goes completely dark! Vincent Price's voice booms over the speakers: “Ladies and gentlemen, please do not panic but scream… scream for your lives! The Tingler is loose in this theatre and if you don't scream you may die!” Behind me a girl screams at a hundred decibels (she's actually the candy counter clerk hired by the distributors to do this at each screening) and she then faints, falling to the sticky theater floor. All the while the soundtrack booms at full volume “Help!” “It's on me!” and “Look out, it's under your seat!”

That's when “Percepto” kicks in, and the popcorn and the Dr. Pepper are history. You see, my seat was one of several dozen that had a low-voltage motor hooked up underneath that was triggered by the projectionist just as the movie reached its climax. Very much like the toy hand buzzer giving the false feeling of an electric shock, “Percepto” proved effective despite its low-tech origins. Yes, this was the shock of an eleven-year-old-lifetime, and my first and only Dr. Pepper shower to boot. Thanks for the memory, Mr. Castle. 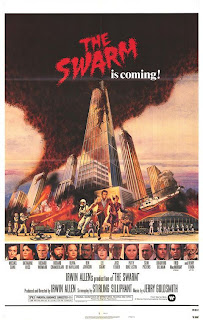 Irwin Allen -- This “Master of Disaster” gave us such big box-office flicks as “The Towering Inferno” and “The Poseidon Adventure” (featuring Ms. Shelley Winters in a performance that still gives me the willies), but Mr. Allen's appearance here is for his $12-million 'B-movie'—“The Swarm”. One can't help but wonder where the money went. Was it for the laughable killer bees themselves, which resemble colored Styrofoam pellets being tossed casually at the supposed victims? Was it spent on the cinematography, where the bees flying in formation look more like a pinch of nutmeg sprinkled over the lens? Perhaps it went to the zombie-like extras running wildly in slow motion, flapping their arms like penguins trying to fly and, in one case, even bumping into a telephone pole? Or did it go into the screenplay, possessing such lame dialogue as an air force pilot declaring: “Oh my gosh! Bees! Bees! Millions of bees! They're all around me! Bees! Bees!”

The killer bees attack picknickers and steal peanut-butter-and-jelly sandwiches, derail a train, down a helicopter, overrun a missile silo and almost destroy the city of Houston (can't have everything I guess), but eventually all is saved and the end credits assure us: “The African killer bee should not be confused with the hard-working, industrious American honey bee, which provides us with honey and pollinates our flowers.” Boy, let's hope they don't get outsourced. A salute, then, to Mr. Irwin Allen and the American honey bee. 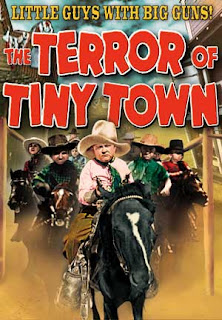 Jed Buell -- By far the least known of the three, Jed Buell produced two of the most exasperating movies of all time. In 1938, motion picture history was made by “The Terror Of Tiny Town”, billed as the only film in Hollywood history with “an all-midget cast”. While not precisely accurate (there is a full-sized announcer at the very beginning of the film just for the sake of comparison), this musical Western features diminutive Billy Curtis galloping around the countryside on his Shetland Pony in search of the bite-sized baddy (played by an actor appropriately named Little Billy). In the end good triumphs over evil when the good Billy blows up the bad Billy with a stick of dynamite. 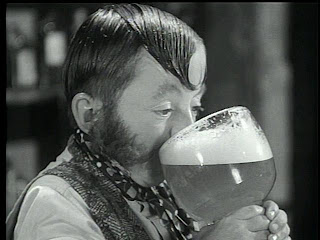 Prior to this inspired denouement we are treated to innumerable midgets walking under saloon doors, drinking from beer steins bigger than their heads, and chasing one another under—rather than around—the furniture. For good measure, a penguin wanders onto the set and waddles inexplicably through one scene. (Inspiration, perhaps, for Fellini's peacock in “Amarcord”? After all, Ecclesiastes dictated long ago that “there is nothing new under the sun.”)

Anyway, the idea for this American classic (just my personal opinion, of course) came to Mr. Buell one day when a subordinate of his declared, “If this studio economy drive keeps on, we'll be using midgets for actors.” The visionary producer jumped at the suggestion, and to realize his dream he ran advertisements in newspapers proclaiming, “Big Salaries For Little People.” His midgets came from every corner of the United States (fourteen even came over from Hawaii), and he eventually signed some sixty averaging 3'8" in height.

Although only a modest financial success at the time, the irrepresible Buell announced a sequel based on a full-grown bruiser playing the mythical Paul Bunyan surrounded by his Tiny Town cast. Alas, this film was never made, and so we are left only with “Harlem On The Prairie”—“the World's First Outdoor Action Adventure With An All-Negro Cast”. Surprisingly, this very early 'blaxploitation' feature was wildly popular in the more than 800 theatres across the nation that catered especially to Black audiences. In its own way “Harlem On The Prairie” helped highlight the commercial viability of quality black cinema, an unexpected by-product of Jed Buell's somewhat perverse sense of casting.

Here's hoping everyone has a wonderful Turkey Day. Go Texas -- beat the Aggies!
Posted by Robert A. Nowotny at 9:47 AM