The Smackdown. What's more dicey than a Hollywood remake? Especially for a director who takes on the task of reshooting a film considered to be the precursor for many big budget Hollywood suspense thrillers that followed, films like Quentin Tarantino's "Reservoir Dogs" or Jan de Bont's "Speed." Might as well go to the craps table at Monte Carlo. But auteurs (and those who think they are auteurs) often go where angels fear to tread. This time it is none other than that other Scott, Tony, who tackles Joseph Sargent's successful blend of suspense, drama, action, thrills (with even a bit of comedy thrown in for good measure) -- "The Taking of Pelham One Two Three." Both films share the same basic underlying premise from the novel by John Godey. And Godey's premise is a goody -- four gunmen hijack a New York City subway train and demand a huge ransom be paid within the hour. The money must not be late in arriving because for every minute thereafter, one of the hostages will be shot. No exceptions. What ensues is a deadly cat and mouse game of verbal sparring between the leader of the highly armored gang and the unlucky transit official who must do everything possible to delay the inevitable. It's said that Benito Mussolini kept the trains running on time. Does Tony Scott do the same for the New York Transit Authority? Or is the original the better ride? It's time to get out the subway tokens -- all aboard! 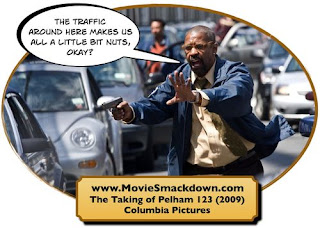 The Challenger. As Chester A. Riley might say, "What a Travoltin' development this is!" Blessed with mega-star power, Tony Scott's version features John Travolta as Ryder, an ex-commodities trader turned ex-con who masterminds a plot to steal even more money than that Bernie guy made-off with. Talk about a low life. On the other side of the tracks, the good side, is Denzel Washington, a Walter Mitty sort of fella who is a disgraced MTA official recently demoted to the position of a train dispatcher in the NASA-like central control room for the Big Apple's subway system. Just his luck that he's the guy who fields Ryder's call for the ransom money. The razor-sharp dialogue from screenwriter Brian Helgeland allow these two heavyweight actors to engage in a wickedly escalating two-person verbal dance as the clock enevitably ticks down. Travolta's language is more foul than the waters of Lake Titicaca, but it is believable, edgy, realistic, and quirky -- his randy remarks about taking a Lithuanian ass model to Iceland is classic.

Adding to the tense proceedings are John Turturro as the head hostage negotiator and John Gandolfini as the mayor. Unfortunately, neither are given all that much to do and the same definitely holds true for all others appearing on screen. Clearly this is a "star vehicle" and the entire focus of the film rests on the excellent performances of the two leads. Editor Chris Lebenzon keeps things moving at a vibrant, sometimes frenetic pace, and Tony Scott's ADD directing style includes more stunts than a Kappa Alpha keg party. Yes, there's action all right, plenty of it, as the streets of the Big Apple resemble "the big one" at Talladega during the cops' desperate race-against-the-clock attempt to deliver the dough to the hijackers. And they better not be late -- Travolta sports a spiffy Breitling chronograph that insures he knows the exact time down in the bowels of the MTA. Fast paced, with a dynamic performance by Travolta and a winning one by Washington, Scott's version delivers a captivating summertime diversion in air conditioned comfort. 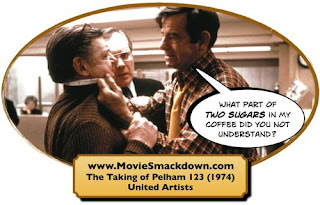 The Defending Champion. The original version of THE TAKING OF PELHAM ONE TWO THREE (yes, the numbers were spelled out back in 1974) had Walter Matthau as Lt. Garber, the somewhat disheveled protagonist who correleates to Denzel's character in the remake. Robert Shaw plays Mr. Blue, the leader of the rainbow warriors who hijack a subway car containing 17 innocent riders and one very unlucky motorman. He is assisted by Martin Balsam (Mr. Green), Hector Elizondo (Mr. Gray) and Earl Hindman (Mr.Brown). These names prove yet again that almost nothing is ever new in cinema. Right Quentin? Other notables are Lee Wallace as the mayor, Jerry Stiller as Lt. Rico Patrone and, appropriately enough, a guy with the honest-to-God name of Jim Pelham who plays one of the Subway Guards.

The terrific screenplay by Peter Stone is rife with current references to a variety of issues facing New Yorkers in the 1970s -- both social and economic. "We don't want another Attica do we?" "There's another strike taking place?" "The city is broke." Unlike Scott's version, virtually all of the supporting cast members have something to say -- whether it be pithy, perceptive, philosophical, poignant or simply polite -- "Gesundheit!" (Believe it or not, this expression holds a significant clue to the identity of one of the hijackers. It is just another example of the countless small details found in Stone's script.) Joseph Sargent's directing style is relaxed, uncluttered, evenly paced. Shot during flu season, NYC has never looked grittier thanks to the muted colors and grainy images lensed by cinematographer Owen Roizman. In fact, there's almost a documentary feel to the film which heightens the tension once the hostage demands are announced. And no review would be complete without mentioning the excellent music score by David Shire. If I had not read the credits, I might have easily assumed that Elmer Bernstein had taken the subway from the West Side.

The Scorecard. June is what I like to call "Alice Cooper time." Yes, school's out for the summer and Hollywood never fails to bring big budget, boffo bonbons to your local Bijou in June. "The Taking of Pelham 123" is among the first of these to hit the screens, and based on a proven pedigree, this suspense thriller is a worthy accompaniment to a tub of buttered popcorn and a Dr Pepper. Comparisons between the two films are inevitable. The Tony Scott edition is definitely "bigger" -- while the exact figures are unknown, there is little doubt that the buget for his film was considerably larger than that of the original, inflation notwithstanding. The ransom amount demanded is higher, too, from $1 million to $10 million. The number of hostages rose from seventeen to nineteen. And the "star power" of John Travolta and Denzel Washington is definitely much bigger -- in fact Travolta's over-the-top portrayal of the gang leader is so bright it is like looking through the lens of the Hubble telescope.

But the original is considered a classic by many, and with good reason. A fabulous script, rock-steady direction, solid performances by everyone on the screen and superb technical aspects, including cinematography, editing, music and production design, all combine to produce a film that is long remembered after the closing credits. Add in a superior screenplay that references civil rights, the Vietnam War, gender issues, fiscal reponsibility, political corruption and a host of other topics on the minds of New Yorkers (and Americans in general) in the 1970s, and the Joseph Sargent version deserves its lofty reputation -- especially since it holds up so well thirty-five years after it was originally released.

The Decision. Both films are blessed with cracker-jack scripts containing enough surprises to keep one thoroughly entertained. And both screenwriters deliver razor-sharp dialogue, although Brian Helgeland's is more of a Bic disposable than the finely honed, serrated blade of Peter Stone's. Not only is Stone's script more nuanced and developed in its portrayal of the supporting characters, it possesses a broader range of emotions and a delightfully cynical sense of humor. "Why the Hell don't you hijack an aeroplane like everyone else?"

But it is in the area of "writer's convenience" where the two scripts differ the most. Albert Einstein once said that "Coincidence is God's way of remaining anonymous." If true, then I have to believe that Helgeland might have been sitting on the right-hand side of the Creator when he penned the scene with Denzel Washington emerging from the subway tunnel grate just as Travolta is walking by. And while neither film excels in their portrayal of the poor innocent folks being held for ransom, the 2009 version is so deficient in this area I would label these bland, vanilla-esque characters "Hostage Twinkies." Even though the story takes place in an underground subway tunnel, I'm sure that Tony Scott, Brian Helgeland and associates wanted to take the crime caper genre to new heights of daring doo. D. B. Cooper they are not. On the other hand, Joseph Sargent's film is a classic, possessing superior suspense, a shocking suicide that is unforgettable, and there's a whole lot more taking place on the screen than two mega-stars and some hard-hitting car crashes. And so the winner is the 1974 edition of "The Taking of Pelham One Two Three." But don't just take my word for it -- Subway's own Jared S. Fogle agrees.
Posted by Robert A. Nowotny at 2:04 PM