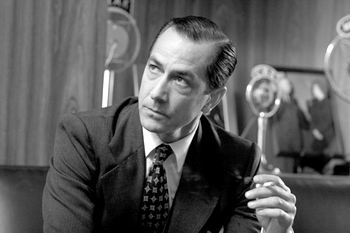 This is George Clooney's second attempt at helming a feature-length motion picture. Like his previous film, CONFESSIONS OF A DANGEROUS MIND, when it comes to directing Clooney remains clueless. Both of these cinematic efforts tackle interesting subject matter that should have carried their audience on a wonderful, entertaining and thought-provoking journey. Unfortunately, both projects fail miserably when the underlying narrative in each gets derailed about as often as Amtrack.

David Strathairn's on-screen portrayal of Edward R. Murrow is brilliant, but his performance is ultimately wasted in a film that simply possesses more defects than a thalidomide baby. Clumsy pacing, poorly blocked scenes and some truly horrific editing are just a few of the most obvious and repetitive problems. And let's not overlook the supposedly major "surprise" that is telegraphed so blatantly Warner Brothers must surely have paid a fee to Western Union.

Overriding everything, however, is the total lack of a coherent structure. You'll know what I mean if you elect to subject yourself to watching a film that is so lame it couldn't even get into a Special Olympics.

The end resuslt is that Clooney's homage to Edward R. Murrow, clearly one of the most distinguished and renowned and pioneering figures in the history of American broadcast journalism, fails miserably. GOOD NIGHT, AND GOOD LUCK might just as well have been about Anderson Cooper -- a more damning comparison escapes me.
Posted by Robert A. Nowotny at 1:28 PM