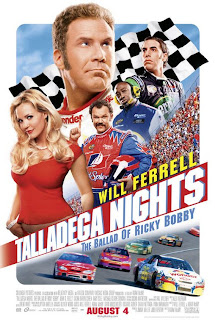 TALLADEGA NIGHTS is a bigger mess than a wetback's morning constitutional.

For those of you who believe that Will Ferrell is the best thing since sliced bread (in this case Wonder Bread) you will surely be disappointed. Even Sacha Baron Cohen comes across as flat as Ann Coulter's chest. There's plenty of blame to go around.

For starters, the chicken fried cornpone script is so atrociously bad I am positive that "Coo Coo" Marlin is black flaggin' it in his grave. Co-writer Adam McKay's direction is so haphazard Boss Hogg should throw him in the hoosegow. And the editing, credited to Brent White, is so lethargic and poorly paced one had better watch this film wearing Lisa Nowak-endorsed diapers; you honestly think this NASCAR narcosis will NEVER end. The same is true for the incessant product placements.

Someone's mammy once said that if you can't say at least one good thing then you should keep your trap shut. With this in mind I will heap a bit of praise on the aptly named Leslie Bibb who is so infectiously hot that I actually needed one (a bib that is) to corral my slobber every time she was on the screen. Egads, Bubba, this is a girlie worth watching; everything else is literally the pits.
Posted by Robert A. Nowotny at 6:57 AM