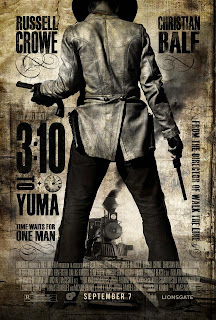 Generally speaking, "I hate remakes" since the vast majority are nowhere near as good as the original. This begs the question: Is it possible that the recently released 3:10 TO YUMA can hold a candle to the 1957 classic starring Glenn Ford as Ben Wade and Van Heflin as Dan Evans? The odds are against it, but Director James Mangold has crafted a very solid re-telling of the Elmore Leonard short story smartly adapted for today's audience by Halsted Welles, Michael Brandt and Derek Hass. This new version wisely preserves much of the intense, intelligent dialogue between the two main characters in the final act which made the earlier film among the best Westerns ever. In addition, Mangold and company have expanded the action and the drama by adding approximately twenty minutes of backstory regarding Dan and his family. The net effect is that Dan's character and motivations are made crystal clear and his ultimate fate is even more poignant. Be advised that the screenplay does suffer from several annoying plot holes big enough to drive a Butterfield Stage through, but all-in-all this is a smart and stylish production which more than holds its own when compared with the original. 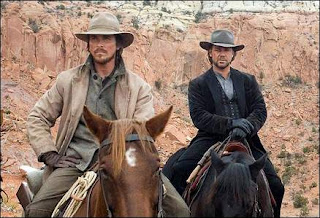 Of course, it doesn't hurt being blessed with a terrific cast headed by Russell Crowe as Ben and the always remarkable Christian Bale as Dan. Together these two forge a unique and memorable relationship that alternates between hatred and admiration. It is a credit to their consummate acting ability that we buy into these characters lock, stock and gun barrel. The rest of the cast is solid, with Peter Fonda especially noteworthy in a relatively small but pivotal role. I purposefully didn't mention his character's name so that you might try to spot him on your own. I dare say that many will not -- here's hoping we will see more of Mr. Fonda in the future. 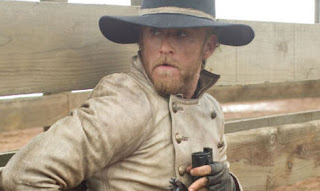 Saving the best for last is Ben Foster whose portrayal of the evil-to-the-core Charlie Prince literally steals the show. Back in the days when the Western was a far more popular genre there were a score of actors who helped establish highly successful careers playing memorable villains in the Old West. Terrific actors like Richard Boone and James Coburn and Lee Van Cleef and Strother Martin and Lee Marvin and Eli Wallach and Jack Palance. As Mick LaSalle, a reviewer for "The San Francisco Chronicle" once said, "There's evil, and then there's Jack Palance evil."

Alas, they don't make Westerns like they used to; at least not very often. 3:10 TO YUMA does the genre justice, and the upcoming PALO PINTO GOLD will hopefully do the same. There'll be more about this new Western featuring Roy Clark, Mel Tillis, Kinky Friedman, Joaquin Jackson, Trent Willmon and Joanna Goode announced soon. I should know, I'm one of the Producers...
Posted by Robert A. Nowotny at 12:29 PM