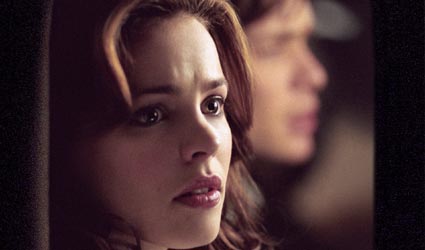 "There isn't enough Visine in the world!" -- Elitestv.com

Wes Craven's RED EYE isn't the worst thriller to come down the runway in recent years. It is, for example, a slightly better film than FLIGHTPLAN -- and it is considerably better than the recently released UNITED 93. Tepid praise, to be sure, but what else can one say when virtually all of today's Hollywood directors resort to a "paint-by-the-numbers" mentality. This adherence to formulaic filmmaking insures that today's movie audiences experience far more trill than thrill -- with obligatory music cues laden with the deepest of bass to heighten the suspense that should have been present due to a quality script. Bring on the timpany, cue the organ, let the subwoofer do what the screenwriter and the director can't...

An interesting comparison can be made if one watches LES DIABOLIQUE (THE DEVILS, 1955), directed by H. G. Clouzot. This acclaimed masterpiece is more frightening than waking up in bed with Leona Helmsley by your side. Here the suspense eminates from a terrific script performed by outstanding actors under the direction of someone who thoroughly understands all of the cinematic arts at his disposal. Unbearable suspense drives the 'killers' (and the audience) up the wall with a host of unexpected surprises and genuine terror. Cloying audio cues are not needed; they are not missed.

An aside: I do not know the record for "goofs" in a mainstream motion picture. RED EYE is riddled with them. Beginning with Rachel McAdams boarding a wide-body Boeing 757 cabin (incorporating 2-3-2 seating separated by two aisles) and then cutting to an exterior of this plane taking off (they filmed an Airbus A-310 -- a conventional one-aisle aircraft with three seats on each row separated by a single aisle just like a Boeing 737). Serious suspension of disbelief issues right off the tarmac, with at least another dozen or more continuity errors that follow.

And did I mention the name of the fictional airline? FRESH AIR -- sounds more like a feminine hygiene product than a company providing scheduled passenger service.
Posted by Robert A. Nowotny at 8:36 AM