FIEND WITHOUT A FACE

Hallelujah! British director Arthur Crabtree has just joined the exclusive ranks of such luminaries as Altman, Truffaut, Fellini, Hitchcock, Eisenstein, Fassbinder and Godard thanks to the prestigious Criterion Collection having just released FIEND WITHOUT A FACE in its "continuing series of important classics and contemporary films." This is a terrific and well-deserved honor.


I first saw FIEND WITHOUT A FACE when I was an impressionable ten-year-old-boy living in New Braunfels, Texas. The tagline simply declared: "Invisible Monsters Suck Out Your Brains!" And they suck out spinal cords as well. What else could I have asked for back then? The same question holds today, some fifty years later. 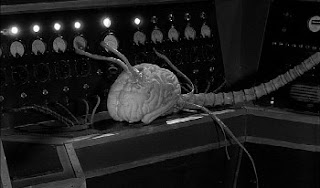 Some critics have called FIEND among the very first "gore films" ever. That's a bit of a stretch, although it was banned in several countries when it was first distributed in 1958, while here in America the MPAA required several minutes to be cut because of scenes deemed to be "too disturbing." Thankfully, the Criterion DVD restores the film to its original 74-minute running time. And what a remarkable seventy-four minutes this is.

The screenplay by Herbert J. Leder was adapted from a frightening short story by Amelia Reynolds Long that first appeared in the greatest pulp magazine ever -- "Weird Tales." And it is a weird tale giving us invisible creatures emanating from pure thought which feed on atomic energy until they grow in strength and, finally, materialize approximately fifty minutes after the opening credits. The wait is well worth it.

Crabtree's direction keeps the story moving along crisply. Marshall Thompson (with over 100 acting credits listed at IMDB.com) does a good job playing Major Cummings, the Air Force officer who ultimately saves the day. Kim Parker portrays Barbara Griselle, the obligatory female love interest with perky breasts and a winning smile. Kynaston Reeves, as Professor Walgate, is solid in his role that is somewhat reminiscent of Walter Pidgeon's Dr. Morbius character in FORBIDDEN PLANET. In fact, FIEND and FORBIDDEN share another similarity in that they both explore the concept of a destructive power residing within the subconscious of each and every one of us. This is heady stuff that is presented extremely well in both cases. In addition, both films are great examples of what sound can do to enhance the feeling of doom and/or terror by an unseen enemy. But it is the slurpy sounds uttered by the attacking creatures in FIEND that will keep you away from a 7-11 for a long time to come. Oh thank heaven for Major Cummings.

One more thing -- the animated main menu on this Criterion DVD is priceless. You won't have a more entertaining, fun introduction to a film anywhere. Heck, this feature alone is worth the entire rental fee. 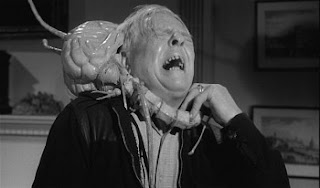 FIEND WITHOUT A FACE is far more than a low-budget sci-fi/horror flick -- in fact, it ranks among the most rigorously anti-intellectual films of all time. Clearly a product of Cold War paranoia, FIEND reflects the period in which it was made. It was a time (much like now, unfortunately) when any type of thought that did not conform to very conservative and traditional lines was treated suspiciously at best, and, all-too-often, was even considered treasonous. In this particular case the biggest danger facing mankind is the misuse of atomic energy -- the de facto result of anyone other than the U.S. government possessing such enormous power. (Maybe Bush is right about Iran and North Korea after all). 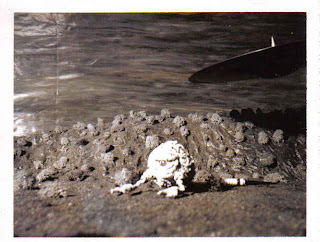 Historical, sociological and political perspectives aside, it is the Harryhausen-style stop-motion animation that makes the biggest impact. These disembodied brains made a lasting impression on yours truly, serving as inspiration for the creature appearing in my very first film, THE HORROR OF APRIL 27TH. In this case the creature is an alien who lands in the Texas Hill Country only to be confronted by a gun-toting teenager driving an old Willys Jeep station wagon. (A gun-toting teenager? Hey, don't forget this 8mm masterpiece was shot in Texas.)

Instrumental in the production of THE HORROR OF APRIL 27TH was Mike Byrnes, my Co-Producer, Co-Director and Special Effects Whiz. Also assisting in this endeavor was Tim Hufft, Jim Brietzke and Jon Meyer. Feel free to confront any and all for their involvement in helping foster my "checkered" motion picture career. 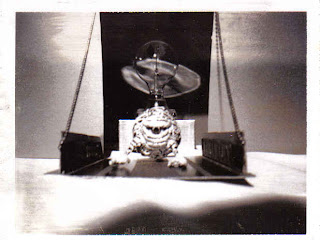 Always trust the instincts of a dog...
Posted by Robert A. Nowotny at 6:50 AM