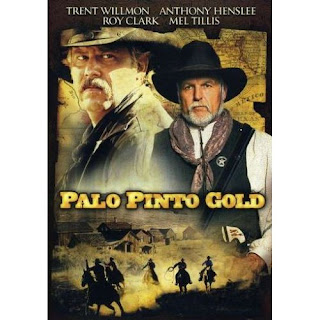 Needtovent is pleased to announce the domestic DVD release of PALO PINTO GOLD today, January 20, 2009. For those of us involved in the making of this lighthearted Western film it is just as much a "Super Tuesday" as it is for the millions attending the inauguration festivities in and around Washington, D.C.

We are also quite excited about our festival premiere this past weekend where PALO PINTO GOLD won "Best Western" and "Best Director" at the Trail Dance Film Festival. Although Trail Dance is only in its third year, it was recently named by Movie Maker Magazine "one of the 25 Top Film Festivals in North America."

Yes, these past few days have been quite rewarding...

For those of you unfamiliar with PALO PINTO GOLD, here's a brief description which appears on the back of the DVD package:

A newspaper reporter (Rodney Lay) seeks the real story behind the biggest gunfight in Texas history. Two old men (Roy Clark and Mel Tillis) are more than willing to tell him what they know -- just as long as their thirst is quenched. Seems the 1880s in the Lone Star State was a dangerous time because of men like the shady Shane Stocksteal (Glynn Praesel), a man so slick, so sleazy he can make a "fart smell like a fifty-cent tulip." But thanks to a dedicated Texas Ranger (Trent Willmon) and a beautiful, but spunky farm girl (Joanna Goode), the bad guys bite the dust, the good guys prevail, law and order is restored, justice is served and the hero gets the girl. So saddle up friends and neighbors for some "Rootin' Tootin' Shootin' Two-Gun Fun." (Dr. Bruce, Quality Broadcasting) 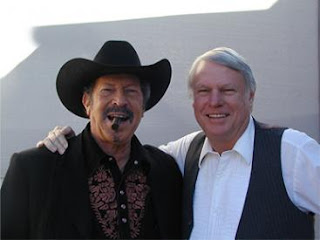 (Kinky Friedman and Producer Robert A. Nowotny on the set of PALO PINTO GOLD)

Since we helped produce PALO PINTO GOLD we did not think it was kosher to review it on our website -- tempted as we were. However, we can report that Bob Polunski (Primetime Newspapers) called PALO PINTO GOLD "Delightul...a Western, just like they used to make 'em." And with a MPAA Rating of PG-13, Rodney Hayden (Honky-Tonk Performer Par Excellence) declared, "It's like a Disney Western!"

You can find DVDs at Blockbuster, Barnes & Noble, Best Buy, Target, Amazon.com, Overstock.com and HEB. So why not get a copy and see what all the fuss is about? As Governor Kinky Friedman says, "Why the hell not?"
Posted by Robert A. Nowotny at 2:13 PM