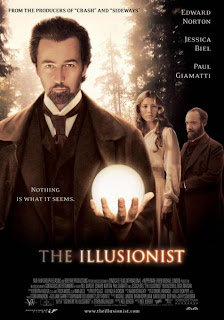 Based on a short story by Pulitzer Prize winner Steven Millhauser, THE ILLUSIONIST is a beautifully crafted motion picture. All facets of the filmmaking art come together in a delicious tale of magic and morals. For those of you hungry for an intelligent and rewarding cinematic experience, THE ILLUSIONIST is a must see. It's like pulling rarebit out of a hat.

Edward Norton's trademark intensity works to his advantage in his portrayal of the enigmatic Eisenheim, a master illusionist who has risen to become the greatest magician in the Austro-Hungarian Empire. Eisenheim's magic tricks not only evoke a sense of wonder, they also seem to embody the ambiguities and the uncertainties of a new century. Each sell-out performance brings more fame and fortune, but these rewards are of little consequence. What Eisenheim wants most of all is to win the love of luscious Dutchess Sophie von Teschen, portrayed by the absolutely stunning Jessica Biel in her best on-screen performance to date. As film critic Richard Propes wrote, "It's no illusion. Jessica Biel can really act!" I concur.

Standing in Eisenheim's way is the powerful, corrupt Crown Prince Leopold, played by Rufus Sewell, who has designs on the Dutchess as well. As Eisenheim soon discovers, Leopold is a more than worthy adversary. Where THE PRESTIGE was about obsession and revenge, THE ILLUSIONIST is about love.

The real star of this show, however, is the incomparable Paul Giamatti, who serves as our guide and narrator while playing the part of Chief Inspector Uhl. Interestingly, Paul Giamatti is the son of A. Bartlett Giamatti, the late President of Yale University and the nemesis of Pete Rose (thank you, sir) when he served as the Commissioner of Major League Baseball. His son has been quoted as once saying, "I don't consider myself a very interesting person. I have the mentality of a supporting actor." Well, if that's what it takes, so be it. Paul Giamatti has been called "America's greatest supporting actor." Once again, I concur. Wholeheartedly. Without reservation. No one else comes close. You get the idea...

What makes THE ILLUSIONIST unique is Director/Screenwriter Neil Burger's carefully orchestrated cat-and-mouse game between the illusionist and the police officer. Each of these men are extremely clever and likeable; we cannot help but root for both in equal measure. To ultimately satisfy the audience's affection for both of these conflicting characters is a significant accomplishment that few other movies have attempted, much less achieved.

Enhancing the solid screenplay that combines intrigue, mystery, murder and an underlying meditation on the seduction of power vs. the power of seduction (in this case, it is magic), THE ILLUSIONIST possesses top-notch production values throughout.

Cinematographer Dick Pope was nominated for an Academy Award, deservedly so. His faded watercolor patina captures the glorious elegance of 1900 Vienna. (I should add that the film was actually shot in Prague, a more than adequate substitute). Philip Glass' score is perfect; it is easy to see, yet again, why he is one of today's top composers.

The impeccable production design by Ondrej Nekvasil and the stunning costumes by Ngila Dickson are also worthy of special mention as is Technical Consultant Ricky Jay, one of the world's most accomplished sleight-of-hand performers as well as a respected historian in the field of magic and the "dark arts." Accordingly, many of the illusions in THE ILLUSIONIST are "real" (or as real as magic gets) in that they were done without the aid of studio special effects wizards or computers. In fact, the producers claim all the tricks shown on screen are period-accurate to the last detail. Amazing, and positive proof that tricks are not just for kids...
Posted by Robert A. Nowotny at 8:16 AM