C.S.A.: THE CONFEDERATE STATES OF AMERICA 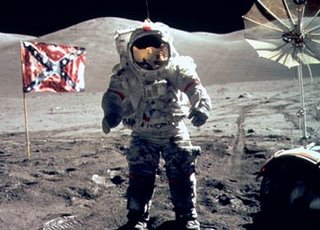 Kevin Willmott is an Associate Professor of Theater and Film at Kansas University. His premise for this film is brilliant -- what would things be like now if the South had won the Civil War?

This is more than an intriguing concept given the on-going racial disparity and unresolved tensions which continue to exist in America. In the hands of someone competent, i.e. Dave Chappelle or Carlos Mencia, this would clearly be a can't miss hypothesis unless, of course, the filmmaker in question is totally inept. Take a bow, Kevin, you have singlehandly managed to mangle this endeavor beyond belief. Your application to be admitted to the Mystic Knights of the Sea Lodge is hereby rejected. Hopefully the same will occur if you ever surface again with another idea for a film.

And as for you, Mr. Weinstein, what on earth were you thinking? Eighty-nine minutes comprising sophomoric, sophistic "slice of life as it could be cinema" certainly tests the stamina of anyone I know -- white or black. What have you to say for yourself, Harvey? Katrina got your tongue?
Posted by Robert A. Nowotny at 8:19 AM