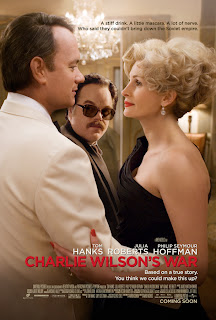 It doesn't happen very often, but occasionally one man can make a difference -- a big difference.

George Crile's 2003 best seller, CHARLIE WILSON'S WAR, is a fascinating and eye-opening account of the most unlikely "difference maker" imaginable. A relatively obscure Congressman from the Second District of Texas, "Good Time Charlie" was known more for his libertine lifestyle than his libertarian legislation. Likeable and licentious (even for a politician), Charlie Wilson served his constituency well since the good folks of Lufkin only really wanted two things, their guns and to be left alone. It's Easy Street replete with his bevy of beltway beauties known, appropriately enough, as Charlie's Angels.

When asked why his entire office staff was composed of attractive, young aides his response is a classic, "You can teach 'em to type, but you can't teach 'em to grow tits." No argument there.

But even the most rakish rapscallion has a conscience lurking somewhere underneath, and for Charlie Wilson the unimaginable atrocities being committed in Afghanistan moved him to muster his entire political savvy toward funding the utter, humiliating defeat of the Russian military and, possibly, to even help hasten the end of the Cold War as a result. Fat chance, huh?

Under the skillful direction of Mike Nichols and a smart, snappy screenplay by Adam Sorkin, CHARLIE WILSON'S WAR is a sparkling, sophisticated satire that chronicles the behind-the-scene machinations of three colorful charcters comprising "Charlie's Team." 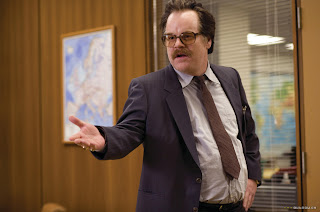 The on-screen "Team," is composed of three marvelous actors with four (4) Academy Awards and nine (9) nominations between them. Charlie is beautifully portrayed by Tom Hanks in a solid, slightly understated fashion that is among his best work in years. He's aided, abetted and abedded by Joanne Herring, a wealthy Houston socialite played by the still-slinky Julia Roberts. Hey, why else have the bikini scene than to let the world know this? By all accounts Ms. Roberts looks good and holds her own, but the screenplay never gives us even a hint why Kabul and country is so important to her character. Maybe the two Afghan hounds usually by her side know -- but we as an audience never do. As for the third member of the "Team," Philip Seymour Hoffman steals every scene he appears in as Gust Aurakotos, a smart, street-wise (i.e. non Ivy League graduate) CIA malcontent who knows the score -- both in the Agency's boardroom and in Wilson's bedroom. 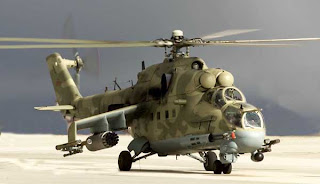 For the Mujahideen to succeed, the most important assistance the U.S. can provide is the ability to shoot down the dreaded MI-21 helicopter gunships which rule the skies. This takes money, lots of money, and eventually "Charlie's Team" covertly coerces those in Congress to fund the effort to the tune of $1 billion dollars for advanced weaponry to arm the Afghan rebels. This includes top-of-the-line, state-of-the-art anti-aircraft and anti-tank rockets as well as other highly sophisticated killing devices. Nasty, nasty stuff.

That this kind of multi-billion dollar illicit activity can and does take place behind Congressional doors is truly alarming. Every American should see this movie or read this book because it reveals a truly frightening aspect of the business-as-usual political scene rarely seen outside the walls of our very own government. Oh momma, I wish it weren't so... 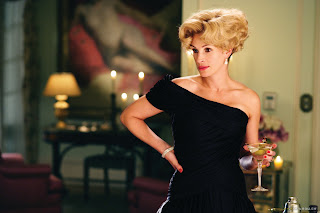 Even though the initial outcome for "Team Charlie" was an unqualified success, the unimaginable, unanticipated final result is that these sophisticated weapons are now used against our troops by the Taliban and others. Since the funding was entirely "covert," the young generation in this part of the world has no idea the fall of Soviet oppression and the end to Russian barbarity was the direct result of American intervention. Yes, once the Russkies left, so did our aid -- zip for schools, zip for infrastructure, zip on maintaining meaningful relationships with the Afghan people. As a result, the overall consequence is an unmitigated disaster -- it's like the forerunner to "Mission Accomplished."

As Nichol's film so pointedly points out, "The ball you've set in motion can keep bouncing even after you've lost interest in it." Mike Krzyzewski knows this, Eva Longoria Parker knows this, little Lateesha in Lafayette knows this, but the typical American politician doesn't. So we go from good guys to bad guys because we couldn't let the world know we were the good guys. Talk about a Catch-22 (another Mike Nichols film).

Perhaps Charlie Wilson said it best, "We fucked up the end game."