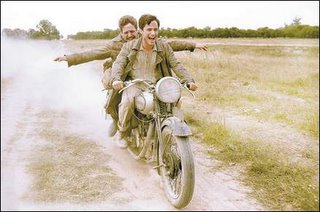 "Wandering aound our America has changed me more than I thought. I am not me any more. At least I'm not the same me I was." -- Ernesto Guevara de la Serna

The year is 1952. Two young men embark on a journey of discovery; it is a journey of over 10,000 miles -- from Argentina to Chile to Peru and beyond. Adapted from books written by both participants, Ernesto 'Che' Guevara and Alberto Granado, THE MOTORCYCLE DIARIES is a beautifully photographed film with excellent production values throughout. Winner of the Oscar for Best Original Song and nominated for Best Screenplay Based On Material Previously Published or Produced, DIARIES went on to garner 24 other international awards and received an additional 34 major international award nominations. Clearly this is a film worthy of your time and mine.

In the final analysis, however, the film fails to fully explain the future revolutionary success of Che Guevara and for that I feel a bit disappointed. Historically, there is no disputing this man's passion or his brilliance, but the waters of Lake Titicaca are far clearer than the character arc developed by Director Walter Salles. This is a shame -- THE MOTORCYCLE DIARIES could have been even better...
Posted by Robert A. Nowotny at 12:48 PM