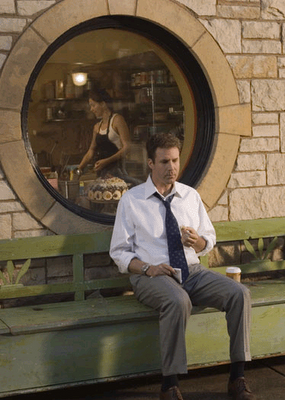 "His thoughts tumbled in his head, making and breaking alliances like underpants in a dryer without Cling Free."

Obviously there is bad writing.

"Her hair glistened in the rain like nose hair after a sneeze."

And there is really bad writing.

And, occasionally, there is good writing.

Case in point is STRANGER THAN FICTION, the new Will Ferrell film that is literally blessed with a terrific cast: especially Maggie Gyllenhaal, Emma Thompson, Dustin Hoffman, Linda Hunt and Queen Latifah. However, it is the screenplay that is the star of this picture. Shot entirely in the Windy City, STRANGER THAN FICTION is a breezy comedy for English majors and anyone else who enjoys a work of literature that is highly creative and cleverly written. In fact, Zach Helm's poignant and insightful screenplay may possibly land him an Oscar nomination this coming year.

Now who would have thought that the words "Academy Award" and "Will Ferrell" would ever appear in the same paragraph?
Posted by Robert A. Nowotny at 7:13 AM