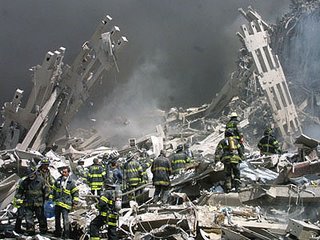 WARNING!!! THE PATH TO 9/11 is a long one and far too rocky for anyone susceptible to motion sickness.

Let me begin by stating that I am not in any way influenced by the political controversy that has unjustifiably surrounded this project. As the disclaimer clearly states on three separate occasions, this miniseries contains "fictionalized scenes" for "dramatic and narrative purposes." I personally don't care which president comes across as the most incompetent -- be it the one having bad oral sex in the oval office (yes, in this case there is such a thing) or the one responsible for beaucoup bagged bodies in Baghdad. I predict you won't care either.

Here's another prediction -- you will agree with me that any film or television program shot by a director of photography with uncontrollable epilepsy should be burried under the dung from a thousand camels. I used to think that UNITED 93 and THE BLAIR WITCH PROJECT held the title, but Joel Ransom's camera work makes both seem smoother than a Bently on the autobahn. He is a self-winding watch's nightmare; within fifteen minutes I was down on my knees praying to Allah to provide him a steady tripod or to provide me a big bottle of Dramamine.

This technique, of course, is known as cinema verite, whereby naturalistic techniques reminiscent of documentary filmmaking (such as the use of hand-held cameras) combine with elements of a scripted film to form a "cinema of truth." As a result, the "look" is intended to be one of factual events being portrayed as they actually took place.

The clumsy, overly expository dialog is courtesy of a self-declared screenwriter named Cyrus Nowrasteh. While Cyrus the Great was the first Achaemenian king of ancient Persia, this contemporary Cyrus should be banned from ever again putting his Number 2 to a Big Chief tablet. On the plus side, I must credit the entire cast for doing its best. Harvey Keitel is solid in the lead role and I was especially impressed by newcomer Prasanna Puwanarajah who plays Istiak.

The special effects are also superior to the average made-for-television film with the one exception of a process shot of the New York City skyline that had the buildings bobbing like Riverdance performers.

This was an ambitious undertaking. THE PATH TO 9/11 could have been an informative and interesting overview of the past decade's overlooked warning signs and damn-near criminal incompetence leading up to the most fateful day in our lifetime. Instead, we get an unsteady, virtually unwatchable whirligig.

Tonight the alphabet network will broadcast the final edition. Expect further capricious cinematography and indifferent dialog. You can also anticipate seeing further blunders among the FBI, the CIA, the past two presidential administrations and others in the collective failure to find and capture Osama bin Laden.

History seems to be repeating itself...we never captured Pancho Villa either.
Posted by Robert A. Nowotny at 6:29 AM