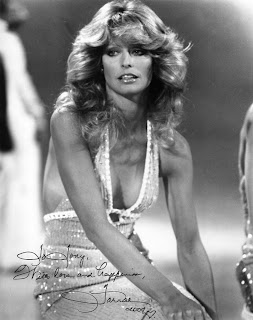 Yesterday was a terrible day. Micheal Jackson's death was a shock, but for me, the passing of Farrah Fawcett was more personal and tragic.

I remember the first time I met Farrah -- it was at a Delta Sig keg party in 1967, and she was dating a very lucky fraternity brother. She was tremendously beautiful, very bright and she told me that she was committed to becoming the best actress she could be. Farrah left the University of Texas shortly thereafter, and the rest is history.

Speaking of history, I was on a blind date that evening and this particular coed wasn't too bad either. In fact, some 40 years later I am still married to her.
Posted by Robert A. Nowotny at 9:07 AM