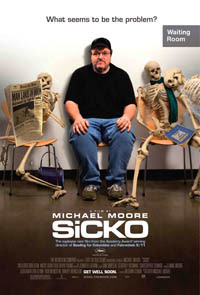 "For many Americans, laughter isn't the best medicine -- it's the only medicine."

Just like Fat Man, the atomic bomb dropped on Nagasaki on August 9th, 1945, "Fat Man" filmmaker Michael Moore drops his own 21 kiloton bomb on the American Health Care Industry in his latest psuedo-documentary, SiCKO. Make no mistake, this is a provocative, powerful, persuasively structured polemic that blasts privatized health care providers and their profiteering agendas. Moore's manipulative machinations hit the mark and, surprisingly, they do so with far more heart than hostility. 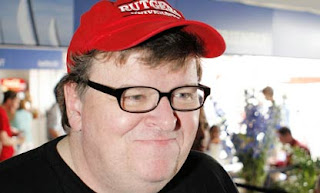 SiCKO is Moore's best film to date. Unlike FAHRENHEIT 9/11, the tone is more about disappointment and dismay than about anger or outrage. It is also about something everyone who sees SiCKO can relate to on a personal basis. Having said this, I fully understand that some will refuse to see SiCKO simply because it comes from Michael Moore, a man whose persona for many is as incendiary as Rosie O'Donnell or Rush Limbaugh. In this case, do not ignore the message for the messenger.

Thanks to Henry J. Kaiser and his influence on the Nixon Administration, the Health Maintenance Organization Act of 1973 was passed and signed into law by President Nixon. The key philosophy of privatized health care is "the less care you give 'em, the more money you make." HMO's stood to make millions and Nixon (heard on tape) agreed it was a brilliant plan. Thanks Tricky Dick. As for old Henry J., he makes Wilhelm II appear benign. Let's truly hope this Kaiser's influence is anything but Permanente.

Given this background, Moore's basic position is that the single biggest problem with American health care is that it has since become totally controlled by corporations and HMOs.

Muley: "Who's the Shawnee Land and Cattle Company?"
Land Agent: "It ain't anybody. It's a company."
THE GRAPES OF WRATH

Well, thanks to the U.S. Supreme Court a corporation isn't a thing but a person. This ruling is based on the 14th Amendment to the Constitution -- the one that guarantees former slaves equal rights. (Does this make any sense whatsoever?) The end result is that corporations are bestowed the rights of individuals in our society. But what kind of people are they? As Moore effectively illustrates, when it comes to providing insurance benefits and health care they are not very compassionate. These folks are driven exclusively by greed and the bottom line -- it's like having Ken Lay as your personal physician.

Moore asks if these are the hands we want to trust to provide our medical care. It is a legitimate question and the answer is obvious. Welcome to the U.S.A. -- ranked 37th by the World Health Organization, just behind Costa Rica and just ahead of Slovenia. (I wonder where Tahiti comes in...)

As you probably already know, virtually every Western nation has some form of universal health care -- they've effectively eliminated the profit motive. And, it sure seems to work (at least in the footage found in SiCKO). Asks Moore, "Why not? After all, we have free socialized police and fire protection, schools and libraries. If another country builds a better car or makes a better wine, we buy it. Why not free universal health care?" 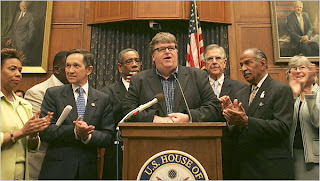 (Congressional SiCKOphants -- all seven of them)


This is obviously a very complicated issue and one that is open to wide-ranging debate. What is not debatable, however, is how our politicians are the puppets of the pharmaceuticals and HMOs. Special mention was made regarding Hillary Clinton who once championed universal health care when she was the First Lady. As Moore points out, now that she is a U.S. Senator she has received over $800,000 in financial support from the medical industry lobby -- not the most of all those in Congress or the White House, but close. She, like the majority of our other "leaders," has clearly been bought and paid for; just another trick turned for pimps like Cigna, Humana and the Kaiser gang.

Over 500 hours of footage was shot during the making of SiCKO. Moore has deftly edited this down to a running time of approximately 120 minutes -- it is time well spent. Especially effective and poignant is the footage taken in Cuba where Moore first tried to get a number of ill Americans free and much-needed medical attention at Camp Gitmo ("the only place on American soil with universal health care.") This, of course, failed -- but not without making a key point and doing so with both humor and pathos.

Moore and his fellow Americans, including three 9/11 rescue workers who have been unable to get their medical needs taken care of in the U.S., then head for Havana where everyone is treated for free. The sheer audacity of orchestrating something like this is what "Fat Man" does best -- it's definitely worthy of a fine Montecristo Panetela and a ice-cold Mojito at the very least.

Whether you like Michael Moore or not you owe it to yourself to see SiCKO. As for me, I'm now returning to the website of my personal health insurer, the ever- exasperating Blue Cross, at www.bcbs.com. One guess what the "bs" really stands for...
Posted by Robert A. Nowotny at 7:09 AM