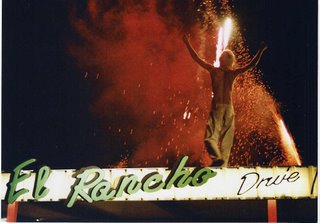 Needtovent.com is pleased to announce the worldwide release of FALSE RIVER, an independently financed motion picture produced by Robert A. Nowotny. Although we were extremely tempted to publish our own comments on behalf of this film we ultimately decided that doing so would not be kosher. Instead, we bring you the kind words from esteemed author and critic Ed Callaway, whose review of FALSE RIVER is the first to be published anywhere...


Jim Mix, a young, bewildered man battling his own personal demons, has escaped with two other "lunatics" from Science Hill Hospital. His metaphorical journey catapults him into a landscape that is as dehumanized and deathly as any recently seen in cinema.

The slippage of sanity is the judgement of a dark god, and man is always working feverishly to indict himself. The town of False River resonates with a banality and corruption that delineates the individual from his greater self, always lying in wait to destroy such an Everyman as Jim Mix.

Jim is prey. The predatory nature of the environment stalking him is relentless. In this milieu of madness, a vastly entertaining story is splashed across a canvass drawn so tight it nearly vibrates. With originality and wit, FALSE RIVER telescopes the human condition in a way that seizes the viewer with a grip that can still be felt long after the film ends. There is murder here, and deceit, caustic humor and callous regard for that which makes us most human. And there is love.

Jim Mix flits between light and darkness as easily as a butterfly, wary yet unaware, in this surrealistic madhouse of the rural South. For this is home to him, and he comes to realize all too quickly that he has no home. He moves shakily along the precipice that is his destiny. Headache pain wracks him, sledgehammer blows against his brain. Haunted by the tragic memory of his parents' death in a car crash, Jim also holds onto the memory of his love for his girlfriend, Judy Ann Moody. A filament of meaning and hope, something to grip tightly as his fragile mind must cope with a murder for which he has been framed as well as the advances of an enigmatic young local woman who sucks him into yet another inner orbit of this ongoing restructuring of reality, the swirling vortex that is False River.

Inside this funhouse mirror stalks one Dick Crockett, clownish and malignant, the demonic in juxtaposition with the angelic: the Lunatic, Charles.

Charles is a lightning rod of hope, peace, and ultimately, transcendence. A shattered smile creases his face, and his misty dreams spill forth to unwitting ears. He and Jim, together in the mental hospital and now on the outside together, "passing ships" as Charles describes them, are a dyad born of love and remembrance. They share the memory of a former life, a sane and safe place that is surely achievable again. Ripped by psychic and emotional pain, Charles knows he has killed. His bonding with Jim, in a desperate attempt to ameliorate his condition at the eleventh hour, serves as a bridge to redemption, an escape from the pain that rips them both.

We meet Jim on the road, briefly accompanied by a dimwit killer named Pokey. Jim's brutal isolation does not bury him, for he still seeks to understand those forces to which he can only react; his struggle is to keep the spirit intact. In this quest he finds, in the lunatic Charles, a scarecrow-thin exposed nerve, a symbolic representation of humanity and salvation. Charles is a highwire artist of the human spirit, at war with despair, and the breaking of his mind has not yet forced him to relinquish his soul. But in the midst of comic evil and the brain-numbing reality of environmental pollution and floor wax and bean dip that comprises an artery of False River, this is a time of suffering for Jim and his spiritual compatriot and guide Charles, an ultimate test of survival forged in blood and madness, and survival is less important than restoration of the heart.

Under its slippery surface, FALSE RIVER is a transformative journey of mythical proportions, ultimately life-affirming. It is played against a backdrop of small-town American reality that is calibrated to stasis and fine-tuned to destruction. The ironic richness of this stark contrast opens possibilities to the viewer that are not readily available in any form, a small gemstone glittering in the sunlight.

If you are among the curious and foolhardy you can acquire your very own DVD copy of FALSE RIVER at:

http://singahe.com/falseriver.html ---- this should take you directly to the ordering page for FALSE RIVER

(If the website's main page appears, simply click on "New Releases 2006." FALSE RIVER is the sixth film listed from the top in the middle column)

With the amazingly low price of $9.98 (plus $3.00 shipping) you'll find that FALSE RIVER will make a glorious addition to your collection of cinematic classics. In addition, these DVDs also make terrific stocking stuffers, reasonably decent trivets and, because they are nice and shiny, they will entertain your retarded uncle for hours on end.
Posted by Robert A. Nowotny at 6:47 AM