Needtovent recently discovered a fabulous website dedicated to Norbert Weisser -- an extremely talented actor whose impressive list of credits can be accessed at IMDB.com. Having worked with Norbert while producing THE RADICALS we were especially pleased to learn that the page devoted to our film continues to be by far the single most popular posting on this website... 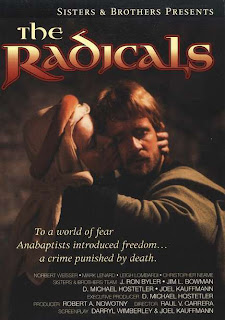 Reprinted with permission from www.norbert-weisser.com --

Two very powerful stories are woven together in the 1990 feature film THE RADICALS. It is the biographical account of Michael Sattler who founded the Anabaptist movement around 1525. The other story, one that is just as apparent, is the story of the absolute love and devotion that Michael and Margaretha Sattler had for each other.

The movie begins by reminding viewers that by 1525 the Roman Catholic Church had united Europe for over 1000 years and their authority was under attack. Reformation had split Europe into two worlds -- Catholic and Protestant. Peasants were rebelling against heavy taxes, and Turkish invaders threatened to overrun Europe. 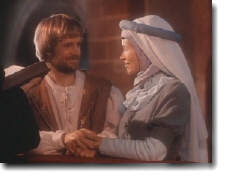 This film covers a very brief period in the lives of spiritual martyrs Michael Sattler, portrayed by Norbert Weisser, and Margaretha, the beautiful Leigh Lombardi. They broke away from their religious order, were married and then began a quest to return the church to the morality of its early years. Michael and Margaretha's love and the deep, heartfelt connection they share is readily apparent throughout this entire film. Margaretha ended up losing her life because she believed in Michael's message and stood strongly beside him. Because she loved Michael as deeply as any woman could ever love a man, she could not renounce her beliefs or her love for him even though doing so would spare her life. Their efforts resulted in a movement the medieval world wasn't prepared to accept and stood ready to terminate -- by any means necessary. 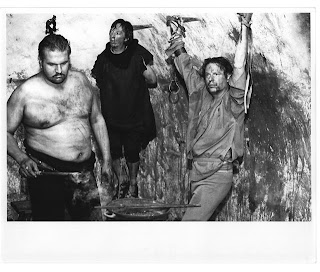 (Producer Robert A. Nowotny portrays a Torture Victim in a scene in THE RADICALS)

Executive Producer Michael Hostetler and Producer Robert A. Nowotny won the CINE Golden Eagle Award in the History category for this movie. Other film festival honors include the Chris Award from the Columbus International Film & Video Festival (1990), the Silver Award presented by Worldfest-Houston (1989), and the Wilbur Award given to "the best faith-based film of the year" by the Religious Public Relations Council of America (1990). Liza Vann served as the Associate Producer and Director of Photography Michael K. Bucher was responsible for the terrific cinematography.

The movie is distributed by Gateway Films/Vision Video and is available from Amazon and other retailers. Included with the DVD is a copy of The Schleitheim Articles as authored on February 24, 1527. (Just as a trivia note, they also have a biographical DVD on Gladys Aylward, the English missionary woman who traveled to China in the 1930's, as played by Ingrid Bergman in the wonderful 1958 movie THE INN OF THE SIXTH HAPPINESS.) 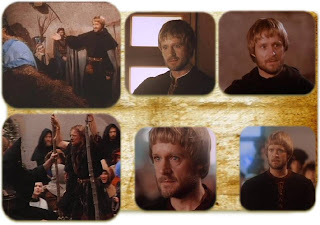 Michael Sattler was a monk who left the Roman Catholic Church during the Protestant Reformation to become one of the early leaders of the Anabaptist movement.

Born in approximately 1490 in Staufen, Germany, Sattler became a Benedictine monk in the cloister of St. Peter and most likely became prior by the time he left in 1525. That year he traveled to Zurich, which was then embroiled in controversy over infant baptism. He became associated with the Anabaptists and was probably rebaptised in the summer of 1526. He was involved in missionary activity around Horb and Rottenburg, and eventually traveled to Strasbourg. In February of 1527, he chaired a meeting of the Swiss Brethren at Schleitheim, and was particularly influential in developing the Schleitheim Confession, a declaration of Anabaptist belief. 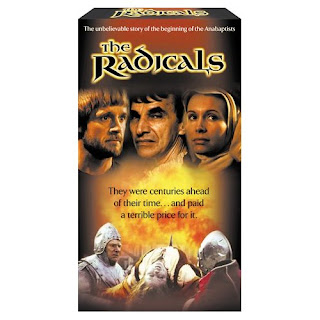 (THE RADICALS is also available on VHS)

All of the costumes for the battle scene and the entire movie, over 700 people in all, were all sewn by volunteers -- primarily by women in Switzerland, for no pay. They wanted to be a part of the film because it had substance. Additionally, over twenty horses were provided for the movie for free by volunteers.

Filming was done in 15th century towns and villages in Switzerland, Germany, and in France, especially in and around Strasbourg.

Michael Hostettler grew up in a missionary family setting in Brazil and was quite interested in bringing forth this important story based on the book "Pilgrim Aflame," by Myron Augsberger. Screenwriters Joel Kauffmann and Darryl Wimberley ensured that the human story was featured just as prominently as the Anabaptist story, and paid particular attention to the love and devotion Michael and Margaretha Sattler had for each other, as well as telling the story of how they lived and ultimately died for their beliefs.

In the special featurette on the DVD, Robert Nowotny has a great story about their many attempts to get the weapons used in the battle scene, swords, lances and the like, from France into Switzerland because they didn't have the proper weapons permits in place. They finally managed to get them across a remote border crossing, and were able to proceed with the filming of the battle sequence.

(Needtovent would like to thank the super-talented graphic designer Jane Bohon for her continued support of both Norbert Weisser and THE RADICALS at www.norbert-weisser.com. Not bad for a low budget, independent feature film that is now over 19 years old. How time flies...)
Posted by Robert A. Nowotny at 6:33 AM