ALCOA PRESENTS: ONE STEP BEYOND

"What you are about to see is a matter of human record. Explain it: We cannot. Disprove it: We cannot. We simply invite you to explore with us the amazing world of the Unknown ... to take that One Step ... Beyond."

These opening words from Host John Newland preceded Rod Serling's introduction to THE TWILIGHT ZONE by ten months. One can argue that from 1959-1961 this ABC Network series delivered more chills than virtually any other program in television history. Fully sponsored by Alcoa Aluminum, it certainly can lay claim to being the first of its kind to hit the airwaves, and, perhaps even more importantly, the stories it presented were based on real-life occurrences. As Mr. Newland verified to John Muir in his last public interview, "It had to be real and there had to be proof, either anecdotal or published."

In addition, the eerie theme song by Harry Lubin, appropriately titled "Fear," was even more visceral, more effective than that of its longer-running rival on NBC. Yes, there's much to like about ONE STEP BEYOND and thanks to the original distributor, Worldvision, failing to renew the copyright, most episodes are now available on DVD.

Needtovent's copy, released by Alpha Video, contains what we believe is the best episode from Season One. THE VISION originally aired on March 23, 1959. The cast included Pernell Roberts, H. M. Wynant, Jean Del Val, Bruce Gordon, Peter Miles and Jerry Oddo in a remarkable tale set during World War I. 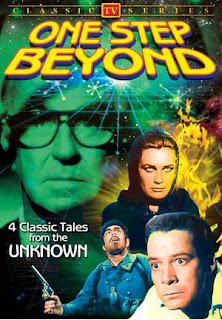 What exactly happened on November 14, 1915, remains a mystery. What we do know is that four French soldiers saw a bright light in the nighttime sky. For inexplicable reasons they felt but never fully understood, they abandoned their posts, discarded their rifles and simply ceased to fight. The four infantrymen were charged with cowardice and sentenced to be executed until, at the very last moment, a chance encounter by their court-appointed defense attorney with a wandering German soldier verified their experience. He, along with others from his unit, had also seen the light and they, too, were overcome with a feeling of serenity and a sensation of peace. Similar reports later came in from Italy and England. All told, a thousand or more soldiers (French, German, English, Belgian and Italian) simply gave up their will to fight and layed down their arms because of the mysterious nightime vision seen on that historic November night some ninety-three years ago.

What a story. What a TV show.

Take our word for it, THE VISION is beautifully written by screenwriter Larry Marcus and skillfully directed by Newland. It is thought-provoking and inspirational. If you take the time to get a copy, we promise it will not be soon forgotten.

Oh how we long for those thrilling days of yesteryear...

(Alpha Video's ONE STEP BEYOND, Volume One DVD, along with many other classic film and television shows, can be purchased at www.oldies.com. Remember, we are talking about THE VISION, not THE VIEW...)
Posted by Robert A. Nowotny at 7:24 AM