TOO WONG FOO...A Romp On The Wild Side 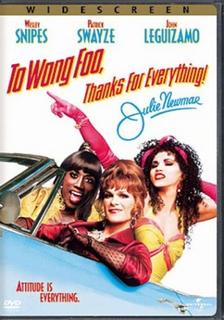 Sure enough, right before our very eyes, two especially
testosterone-laden Hollywood actors transform themselves into
certifiable New York drag queens in Director Beeban Kidron's
flashy "Too Wong Foo, Thanks For Everything, Julie Newmar".

None other than Wesley Snipes (who achieved well-deserved
international stardom for his dynamic performance in the high
action drama, "Passenger 57") and Patrick Swayze (the "Dirty
Dancing" hunk) play, respectively, Noxeema Jackson and Vida
Boheme in this frolicking road picture replete with delicious
dialogue and a pulsing soundtrack throughout.

Talk about high concept. And the transformation is remarkable,
indeed. Good enough for Noxeema and Vida to tie for top honors
in a highly competitive Drag Queen Pageant ("Nobody here tonight
is winning Miss Congenialty," notes Noxeema). And good enough
for an uncredited Robin Williams to be smitten at the sight
of them. "I feel like a compass pointing due North!" he giggles.

All goes relatively well until a red-neck Sheriff (played with
comical glee by the appropriately portly Chris Penn) makes a
move on the voluptuous Vida and discovers the hidden truth.
One punch later and Vida is back behind the wheel of the Caddy,
her traveling companions in tow. Unfortunately, the Caddy breaks
down and until a part can be shipped they are marooned in a
broken-down small town that makes Cotopaxi, Colorado look
cosmopolitan. The dreary hotel room and the dreary lives of the local
inhabitants, especially the down-trodden women, just won't do,
and so Vida et al initiate "Operation Decorator Storm", and the
make-over begins.

Engaging moments abound as Snyderville and its populace
rediscover a sense of self-esteem. One-by-one long-repressed dreams
are remembered and pursued and the cumultive effect is a heart
warming scene of the entire town dancing in the streets to the
beat of Johnny Mathis singing "Hold Me, Thrill Me, Kiss Me."
As Vida notes, "Sometimes all it takes is a fairy!"

The marquee-unfriendly title comes from an autographed photo
of the statuesque Julie Newmar ("The only catwoman!" declares
Vida -- and I wholeheartedly agree) which hung on the wall of a
Chinese restaurant. Credit Douglas Carter Beane for a sassy,
hip screenplay chock-full of marvelous little details and
rife with references such as Moms Mabley, Sally Struthers, Tex
Avery, Emma Peel and Mary Jo Kopechne. If these names
mean anything to you, then "To Wong Foo, Thanks For
Everything, Julie Newmar" is probably your cup of tea.

It is with some irony that I first saw "To Wong Foo, Thanks
For Everything, Julie Newmar" when it was playing at the
Majestic Theater in Crested Butte, Colorado during the opening
weekend of the Third Combined Colorado Hunting Season. Just
as little Snyderville was being visited by three irrepresible drag
queens on the screen, our small burg was playing host to a different
kind of cross dresser -- the ubiquitous, red-necked, all-American
deer hunter.

Do clothes really make the man?
Posted by Robert A. Nowotny at 1:06 PM