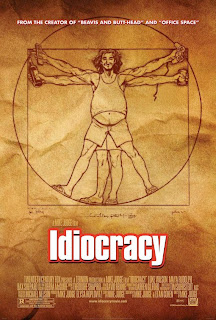 Luke Wilson plays Private Joe Bowers, a flesh-and-blood Beetle Bailey, who is cryogenically frozen by the U.S. Army in a trial experiment to see if the process actually works. Alongside him is Rita (portrayed by Maya Rudolph), a simple prostitute willing to undergo the same experiment for a reduced criminal sentence. Unfortunately, they are both forgotten and it is not until the Great Garbage Avalanche of 2505 that they find themselves unearthed and unfrozen.

Narrator: "The years passed. Mankind became stupider at a frightening rate. Some had high hopes genetic engineering would correct this trend in evolution, but, sadly, the greatest minds were focused on conquering hair loss and prolonging erections instead."

Bowers find himself in immediate trouble and befriends Frito (Dax Shepard in an amusing role), a lawyer who is so inept he makes Alberto Gonzales look like Perry Mason. However, once it is discovered that Bowers is clearly the smartest man in America his legal troubles come to an end and he is made the Secretary of the Interior. No, there's no Bush in the White House in 2505; no Clinton either. At least there is something to look forward to a mere five hundred or so years down the road.

Writer/Director Mike Judge's premise of a future populated by impoverished, slovenly, moronic, junk food-addicted, masturbatory cretins looks like a winner on the surface. Alas, the creator of BEAVIS AND BUTT-HEAD proves to be nothing more than a butt-head himself in this painfully inept, sophomoric attempted satire of current pop culture trends forecast to the far distant future. No wonder Fox Studios took two full years before deciding to ultimately release this mind-numbing mess, even going so far as to forgo trailers and TV ads. Clearly the Fox executives were embarrassed, and rightfully so.

The screenplay is so lame that Barbaro is turning in his grave. If it took Butt-Head more than three Mountain Dews and two morning constitutionals in the Minneapolis Airport to write this miasmic mess he is even more acutely addled than Larry Craig.

To be fair and balanced, which is the least I can be for any division of the Fox Empire, there are several relatively funny moments in the first half of the film.

Frito: "Yeah, I know this place pretty good -- I went to law school here."
Pvt. Joe Bowers: "In Costco?"
Frito: "Yeah, I couldn't believe it myself. Luckily my dad was an alumnus and pulled some strings."

IDIOCRACY is pretty much all downhill from here. In fact, anyone who continues to watch after this exchange of dialogue might as well partake in this year's Hahnenkamm.

I'm reminded that there is an old adage that if you don't have anything good to say, keep quiet. I will adhere to that.

When it comes to IDIOCRACY, even Marcel Marceau agrees.
Posted by Robert A. Nowotny at 7:56 AM