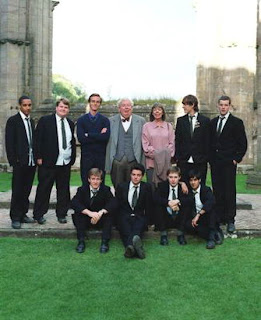 Is all human knowledge precious whether or not it serves the slightest human use? A. E. Houseman, the acclaimed English poet, among others, certainly thought so. Or is it more important to simply focus on knowledge that is both quantifiable and directly relevant to one's place in the world, as many current institutions of learning believe?

These are important questions, possibly more so today than ever, and they are brilliantly explored in Alan Bennett's award-winning play, THE HISTORY BOYS. The winner of six Tony Awards (the most in 50 years) and England's Laurence Olivier Theatre Award for Best New Play, the stage version was successfully brought to the screen in 2006.

The transition from stage to screen is often a tricky one, and there have been far more misses than hits. In this case not only was the screenplay written by Bennett, but the film was directed by Nicholas Hynter, the director of the original stage production performed at the National Theatre in London. And here's the biggest surprise of all -- the entire cast from the original stage production was signed to do the movie, a rare and risky undertaking given the fact that most had no previous film experience. 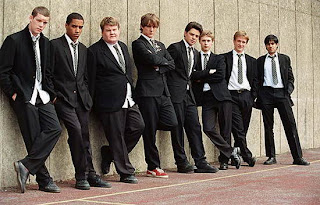 Set in the summer of 1983, eight working-class students from Cutler's Grammer School in Yorkshire are chosen for special tutoring to help prepare them for the rigorous entrance examimations at England's two most revered schools -- Oxford and Cambridge. Up to this point in time they have been well schooled by the existing faculty, especially the "general studies" instructor simply known as Hector.

In a film that is flawlessly cast, Richard Griffiths' portrayal of Hector as Cutler's corpulent, compelling and caring teacher is among the best acting performances since the days of Charles Laughton, another astounding endomorph of stage and screen. His exceptionally touching scene with the shy, introverted Posner ("I'm a Jew...I'm small...I'm homosexual...and I live in Sheffield. I'm fucked.") is one of the most introspective and heartfelt seen on the big screen in years.

Hector loves teaching; he treats it as an art form. For him, the classroom is the gateway to the soul, both his and those he is entrusted to challenge on any topic, even if the subject matter has nothing to do with passing the upcoming "Oxbridge Entrance Exam." And while the students love his unorthodox style which bewitches, bothers and bewilders them, this unwavering romanticist's time is quickly coming to an end under the shadows of Margaret Thatcher's England.

"Shall I tell you what is wrong with Hector as a teacher? There is inspiration, certainly," declares the Headmaster, "but how do I quantify that?"

Cutler's results-oriented Headmaster is effectively played by Clive Merrison. While having eight of his lads qualify for the Oxbridge is gratifying from both a personal and professional perspective, he is driven to have as many of the boys pass as possible. To accomplish this he hires a new faculty member who is far more pragmatic than Hector; someone who will "teach to the test." 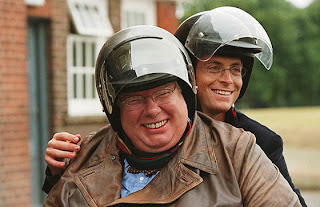 Enter Irwin (nicely portrayed by Stephen Campbell Moore), a young, no-nonsense teacher who is the very opposite to Hector in every way imaginable. He epitomizes the educational philosophy that cares less and less about scholarship while obsessing over purely quantifiable results. For him, education is merely a tool for personal advancement where you should spend time learning only what you think you need to know; everything else is unimportant.

THE HISTORY BOYS is raunchy, reflective, even raw. The film may offend some by treating student/teacher flirtation in a surprisingly unconcerned, casual manner. Rogers & Hart's "Bewitched, Bothered and Bewildered" has new meaning when Posner sings:

"The way to my heart is unzipped again...
Bewitched, bothered and bewildered -- am I"

But THE HISTORY BOYS is also inspirational, invigorating and intellectual. It energetically explores the moral consequences of shaping reality -- where one can posit history as the infinitely malleable interpretation of past events simply to suit one's needs. In an early scene one of the boys says, "How do I define history? Well, it's just one fucking thing after another, isn't it?" Or is it?

At it's core is the central debate about what education is for, who owns history and, in a thought-provoking way, how we should conduct our lives. When was the last time you saw a movie that tackled such heady stuff?