A DAY WITHOUT A MEXICAN -- Holy Guacamole! 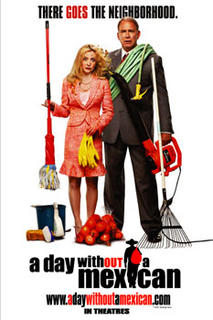 "If you want to make the invisible visible, take it away."

That's pretty much the premise behind the fascinating and illuminating independent feature film -- A DAY WITHOUT A MEXICAN. Writer/Director Sergio Arau gives us a glimpse of just what would happen if somehow every Hispanic in the state of California would suddenly and miraculously disappear. My God -- who would mow the lawns and blow the leaves and pick up the trash and pour the concrete and paint the houses and work the agricultural fields and tend to any number of other low-paying, unglamorous needs on behalf of the remaining gringos? Who, indeed? More importantly, the devestating economic impact on the state's overall economy shows clearly that one should be careful for what one wishes for.

This unique look at the economic and the quality-of-life aspects provided by the huge population from south of the border is a breath of fresh air from the steady stream of pap and crap being released by the major studios in LA-LA Land. And while Mr. Arau misfires frequently in his narrative and he delivers a film that is a full thirty minutes too long, I salute him for his efforts. And so I lift my glass of Tecate high and I dream -- yes, I dream of what life would be like if we could enjoy A DAY WITHOUT A MORMON. (I'll gladly risk any conceivable negative consequences -- as if there could be any whatsoever).
Posted by Robert A. Nowotny at 11:57 AM