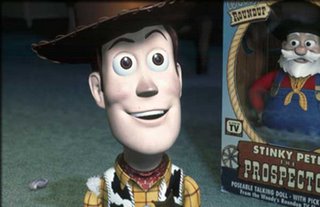 Earlier today history was made when the Needtovent Headquarters received a disturbing dispatch from Tulsa, Oklahoma. We admit that anything to do with Tulsa is automatically disturbing, but this communication went way beyond the norm. In fact, it was so shocking, so scathing, so salacious that Ann Coulter wishes she had sent it. We will keep the identity of the sender secret for fear of Pixar Police retaliation, especially since three cots at Camp Gitmo became available yesterday thanks to a trio of hanging chad jihadists.

You might ask: What could be even more upsetting than another POSEIDON remake?

Not much, except maybe this: "Last night I watched TOY STORY 2 on ABC. It's Winnie the Pooh taken too far. Anything that makes you feel so guilty about a toy really sucks."

To pooh-pooh TOY STORY 2 is beyond comprehension. Almost. After all, what in the name of Toya Ulrich is going on here?

This got us to thinking -- does anyone else share the same opinion?

In trying to find a negative review of TOY STORY 2 we had to dig deeper than a Bulverde soccer mom's belly button. Alas, one reviewer out of the thirty-six we checked agreed with our Tulsa Troubadour -- the ever surprising Mr. Cranky. Here's what Mr. Cranky wrote. We couldn't have said it better...

"I'm sure that you are familiar with the confusing practice of translating the title of American movies into Japanese. For example, TERMINATOR 2 becomes MAN WHO SHOOT BIG GUN and FIGHT CLUB becomes BOYS WHO DO NOT WASH. This is how I felt watching TOY STORY 2 -- as if the movie I was sitting through had two entirely different meanings to two entirely different segments of the population.

For instance, about an hour into the film, after Woody (Tom Hanks) is taken by an evil toy store owner (Wayne Knight), he finds out that he was once part of a television show with Jessie (Joan Cusack), Prospector (Kelsey Grammer) and Bullseye the Horse. Woody wants to leave and return to his owner and somewhere during his explanation Jessie reminisces about how she once had an owner and breaks into a song about it.

Thank you, Mr. Cranky. And thank you, Tulsa, for giving us something to ponder beyond Oral's Opulent Oratorium.
Posted by Robert A. Nowotny at 10:14 AM