SKY CAPTAIN AND THE WORLD OF TOMORROW 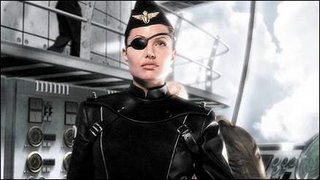 "Angelina Jolie wearing an eye patch! Scratch off #43 on my 'Things I Really Hope To See Jolie Do Before I Die' list." Keith Simanton, Reviewer for imdb.com

Unfortunately, SKY CAPTAIN is pretty much eye candy and nothing more. Writer/Director Kerry Conran and his art department do a fantastic job of giving us a stunning, futuristic world set in the year 1939. From a purely visual point of view there's flash and panache galore. As for a story, or any semblance thereof, a Jehovah's Witness pamphlet is better written and more entertaining.

The cast for this fluffy fantasy is certainly appealing. Jude Law, as Joe "Sky Captain" Sullivan, possesses the look and the swagger of a P-40 fighter pilot par excellence. Gwyneth Paltrow plays perky, plucky Polly Perkins to perfection. Giovanni Ribisi steals his scenes as Dex Dearborn, Sky Captain's know-everything, do-everything side kick. The aforementioned Angelina Jolie (as Captain Franky Cook) elevates the level of fantasy as only black leather and a riding crop can do. And Sir Laurence Olivier even comes back from the grave to play the evil Dr. Totenkopf. Although dead and buried since 1989, he makes a brief appearance thanks to filched footage from previous films. He is by no means the only thing that isn't real.

SKY CAPTAIN was shot almost entirely on a sound stage in front of a blue screen. In fact, just about everything you see (except for Polly's office and the principal actors) was computer generated in keeping with the genesis of this film, a six minute short Mr. Conran produced on his very own Apple computer.

Let's give credit where credit is due. Mr. Conran and his Big Mac aimed high; this tale of an eponymous mercenary wants to be the next RAIDERS OF THE LOST ARK and it often has the right look. Unfortunately, this "world of tomorrow" just doesn't have enough substance, Jolie's jollies notwithstanding.
Posted by Robert A. Nowotny at 6:23 AM