Don't let the trailer mislead you -- BLACK SNAKE MOAN is as much a sermon on the screen as it is sexploitation. Not exactly a Sermon on the Mount, mind you, it's more of a Sermon on the Mountee. Still, there can be no denying that this extremely unique film delivers far more than what the previews choose to reveal.

BLACK SNAKE MOAN mambos slowly, adeptly, unexpectedly. Yes, there's chained heat -- literally -- and plenty of delicious decadence, especially within the first hour. But under the skillful direction of Craig Brewer there's also a surprisingly tender narrative that is reminiscent of the parables found within the pages of the Bible where individuals experience not only a change in their lives, but true forgiveness as well. That's mighty powerful stuff.

The character arcs are as well drawn as any in recent memory. Lazarus (Samuel L. Jackson) is a God-fearing black man who once played the blues. He now lives them, what with his wife walking out of his life to be with his brother of all people. Rae (Christina Ricci) is a delectable Dixie chick with an insatiable itch, the kind that starts in the head but quickly works its way southward. Two down-and-out characters who pretty much exist outside both society and the law, living on the fringe, both literally and figuratively, and both desperately in need of healing. 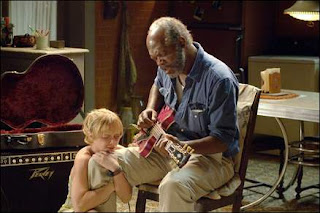 "I'm going to cure your wickedness," says Lazarus. What follows is nothing short of an evangelical exorcism ending in an upbeat, redemptive finale; proof that with the help of God even the most wayward of lives can be saved.

Jackson is damn near perfect in the complex role of Lazarus. Even his blues singing comes across with conviction and passion. Likewise, Ricci is unforgettable as the white trash nymph every Duke lacrosse player can only dream about. She literally bares all in giving the perfomance of a lifetime. Justin Timberlake, S. Epatha Merkerson and John Cothran, Jr. round out the cast and are excellent as well.

In the final analysis, BLACK SNAKE MOAN (the title is from a 1927 blues song by Blind Lemon Jefferson) is a radical departure from mainstream cinema. It may be a B-movie in theory, but it rises way above that classification to achieve a genuinely affirmative and entertaining cinematic experience.

"Judge not, that ye be not judged. For with that judgement ye judge, ye shall be judged; with what measures ye mete, it shall be measured to you again." These words from the Sermon on the Mount ring true, and so it is with careful consideration that I hereby declare that BLACK SNAKE MOAN is, in my judgement, a film worth seeing. I do not feel I am bearing false witness, although that pesky, perky Jehovah's Witness lady that keeps coming by might disagree.