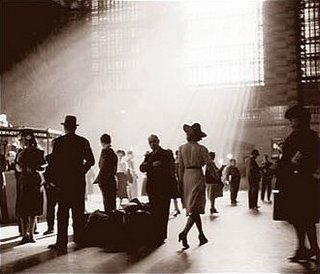 There are many who believe that absolute perfection is simply unattainable -- at least in this life and on this planet. I'm not certain where I stand on the issue, but I do know that I've seen things that come pretty darn close. For example, a Ferrari 550 Barchetta, or Italian super model Monica Bellucci or the "Manager's Special" at Parziale's Pizzeria in Canyon Lake, Texas. But these are topics for another day and another time...

When it comes to filmmaking, however, there are very few films which even come close to achieving perfection. And one of these is, unfortunately, not available for purchase anywhere. In this case I'm referring to a student film that was written and directed by Adam Davidson while attending Columbia University.

"A student film? You can't be serious?"

Beautifully shot in black & white, this is the story of a white woman and her uncomfortable encounter with a black man in a cafeteria located in Grand Central Station. After taking her tray to an empty table she discovers she has forgotten her silverware. Upon her return she is astonished to find a large black man eating her food. After the initial shock subsides she decides to be defiant and to eat off the plate as well. When they are both finished the black man gets up and walks away, only to return with a cup of coffee for them both. After a sip or two the woman gets up and walks toward the exit. Just before stepping out she turns back and discovers that her own meal was on another table all this time.

With minimal dialog (and none between the two main characters), Davidson manages to tell a complete, complex, compelling and compassionate story in a mere ten minutes. He initially entertains the viewer by masterfully crafting a concise screenplay that contains a surprising twist and an even more surprising reversal. And then, just when it isn't expected, he astounds us with a stunning resolution that will not soon be forgotten.

Since his graduation Davidson has established a successful career directing a whole host of prime time television programs, including episodes of LAW & ORDER, MONK, SIX FEET UNDER, DEADWOOD and GREY'S ANATOMY to name only a few. With his obvious talent I, for one, would welcome his being given the chance to write and direct a feature film.

Surely that day will come.
Posted by Robert A. Nowotny at 11:31 AM