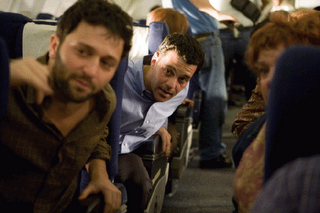 It is almost a full twenty-four hours since I left the Marketplace Theatre in New Braunfels after seeing UNITED 93.

I am still shaking.

Yes, I continue to shake uncontrollably from this intense experience -- but the cause is not for any of the reasons you might logically assume.

To begin with, my trembling has nothing to do with the inherent nature of the story. When it comes to a deeply visceral screening experience you can find about as much emotional intensity in an old SKY KING rerun.

Nor is my malady a result of witnessing once again just how inept and incompetent the US military, the FAA and this nation's government was on 9/11. For example, hours pass by and, ultimately, a grand total of four jet fighters are scrambled. Yes -- only four jets can even get into the air -- and two of these were unarmed. You'll normally find that many zipping past at the opening ceremonies of a NASCAR event each weekend. It's enough to make the average person quiver like an aspen leaf; but this is old news and it isn't the cause of my current woes either.

Finally, let me reassure you that my spasms are not a debilitating reaction to observing every passenger's cell phone working perfectly and without interruption as their Boeing 757 rockets along at over 550 miles per hour, across several states and at altitudes ranging from 33,000' down to 3,000' and less. This technological accomplishment is Cingularly unfathomable to me, but I have elected not to dwell on my personal cell phone experiences and so the cause of my present condition lies elsewhere.

I find it fitting that Cinematographer Ackroyd's next project will be an Irish/UK co-production titled THE WIND THAT SHAKES THE BARLEY. What do you want to bet he wears a self-winding watch?

PS Whatever happened to Herkie Walls?
Posted by Robert A. Nowotny at 12:07 PM