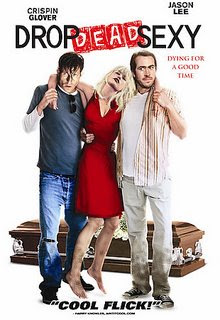 Hold your horses -- because I know two guys who can.

I'm referring, of course, to Brad Dourif (the voice of Chucky) who lubricates his discussion with white wine. Not to be outdone, Crispin Glover does his talking in his boxers. Each spends time with their very own delectable corpus delicti. The best part of all is that these gorgeous gals don't talk back.

While these scenes may sound disturbing, be advised that the two delicate damsels who have met their demise are not defiled in any way. Thanks to the skillful direction of Michael Philip, DROP DEAD SEXY is more like a ribald romp in the romper room. Yes, the film is rated R, but it is more of a Hardy Har Har than a Hard R.

In addition to cult favorites Dourif and Glover, the surprisingly strong cast includes Jason Lee (MY NAME IS EARL) who plays Frank, a dim-witted "decider" barely getting by in Bush country (aka Central Texas) whose get-rich schemes always seem to backfire. His partner is Eddie (Glover), a "subterranean architect" (aka grave digger) whose fondness for both Frank and the bottle make him a lanky, lovable and loyal lackey. Together they end up robbing the grave of Crystal Harkness, a trophy wife who they believe was buried with some of the family jewels -- the kind you get at Zales.

Melissa Keller plays the captivating cadaver who is schlepped hither and yon by the bungling bozos. Along the way this lively bunch of losers (well, two out of three are lively) encounter Frank's mother who is initially introduced while she is "stuffing her beaver." The always-wonderful Lin Shaye plays Ma Muzz, a no-nonsense taxidermist whose quick temper is anything but motherly, her beaver notwithstanding. They also pay a visit to the town's mortician, played with ebullient elan by Dourif, who is convinced that Crystal was murdered. The primary suspect is Crystal's slimy husband, but the local crime boss with the nystagmus eyes is a possibility also. Emmy winner Pruitt Taylor Vince plays the heavy with the pulsating pupils and he literally steals every scene he is in. In fact, his performance alone is reason enough to see DROP DEAD SEXY.

Throw in the Klimaszewski twins, a surprise plot twist or two, a half-dozen or more very funny lines of dialogue and a couple of Shiners along the way and you will find that 108 minutes can go by very quickly. When all things are considered, both here and at NPR, DROP DEAD SEXY raises the Lipper Average for films shot in Austin -- most of which are either overtly ostentatious or they project a maddening monochromatic burnt orange pallor.
Posted by Robert A. Nowotny at 6:57 AM