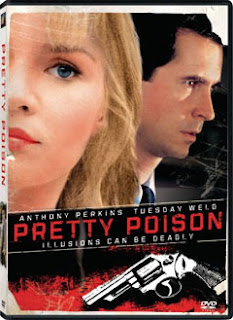 If it's Tuesday, this must be bedlam...

According to the bio posted at www.imdb.com, Tuesday Weld first began her career as a successful child model. At nine years of age she suffered a nervous breakdown. At ten she started drinking heavily. One year later she started having affairs. And at age 12 she tried to commit suicide.

Lord have mercy. (This trumps Paris, Lindsay and Nicole combined.)

One more tidbit -- at fourteen a Hollywood magazine reported Tuesday's measurements to be 36-19-35. No wonder she was once the apple of Dobie Gillis' eye. 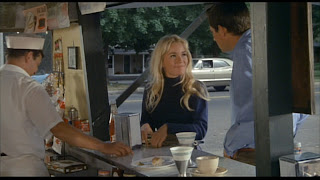 PRETTY POISON stars Tuesday Weld and Anthony Perkins in a cult classic that broke new ground when it was initially released in 1968. Never before had white-bread, Middle America looked so deranged. Perkins is perfectly cast as a damn near certifiably crazy, tormented arsonist possesed with far-fetched flights of fancy. Compared to Weld's character, however, he's the "normal" one.

Based on Stephen Geller's novel, SHE LET HIM CONTINUE, and adapted for the screen by Lorenzo Semple, Jr. (best known as the screenwriter for THE PARALLAX VIEW, THREE DAYS OF THE CONDOR and, especially, TV's BATMAN), PRETTY POISON has influenced a host of filmmakers over the decades. David Lynch and Quentin Tarantino are just two names that come to mind.

PRETTY POISON was director Noel Black's theatrical debut. His subsequent career was almost exclusively relegated to television, however, where he directed such shows as HAWAII FIVE-O, McCLOUD, KOJACK and several MOW's including QUARTERBACK PRINCESS and PROMISES TO KEEP. This seems surprising to me; I cannot help but wonder why he wasn't offered more feature film opportunities. 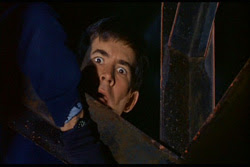 As for Ms. Weld, she is famous for the number of major motion picture projects she turned down: LOLITA, BONNIE AND CLYDE, TRUE GRIT, CACTUS FLOWER and BOB & CAROL & TED & ALICE. In explaining these decisions, she once said, "I do not want to be a huge star. Do you think I want success? I refused BONNIE AND CLYDE because I was nursing at the time but also because deep down I knew it was going to be a huge success. The same was true of BOB & CAROL & FRED & SUE or whatever it was called. It reeked of success." Success may have spoiled Rock Hunter, but not Ms. Weld who ultimately succeeded in living her life exactly like she wanted.

One final note regarding Tuesday Weld --

When asked what drove her into seclusion in the 1970's she answered, "I think it was a Buick."

Zelda Gilroy couldn't have said it better.
Posted by Robert A. Nowotny at 8:41 AM