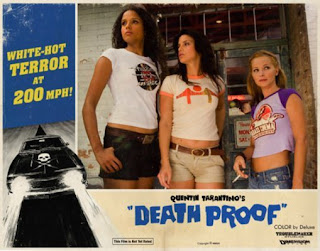 "Has Tarantino ever made a singularly authentic, sincere, innovative frame of film in his life?"
(Brandon Fibbs)

DEATH PROOF is Quentin Tarantino's feature-length contribution to GRINDHOUSE, the twin-bill gore-fest which was intended to be a homage to the classic, albeit classless, drive-in B-movies of the 1950s and 1960s. Combined with several fake movie trailers and Robert Rodriguez's full-length PLANET TERROR, the total running time for this patronizing pastiche was a whopping 191 minutes. Overly long and ultimately disappointing, GRINDHOUSE was a box office failure.

Well Tarantino and Rodriguez and the Weinstein's, Executive Producers Bozo Bob and Hapless Harvey, re-released both films as single offerings and the staff at Needtovent recently screened DEATH PROOF thanks to the fine folks at AMC which, in this case, could very well stand for Agonizingly Mindless Cinema.

DEATH PROOF stars Kurt Russell as Stuntman Mike, a psychopath who uses his heavily reinforced muscle car as a killing machine to annihilate unsuspecting, beautiful young women who have a propensity to bare their belly button. The navels are nicely shaped, lint-free "innies" -- just what any red-blooded hormone-driven fella would find arousing, for lack of a better word. But Stuntmn Mike has a hard-on of a different nature for these nubiles; what/why is never divulged. And what Stuntman Mike forgets is that Hell hath no fury like a woman being creamed by a big bore Chevy. Sounds promising enough, but the biggest bore of all is the incessant bantering among the various broads which bogs down any momentum until the very end. By then, one hardly cares. 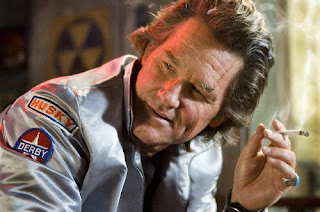 On the bright side, Russell's hypnotic/psychotic Stuntman Mike is a fun character to watch. And the legion of libertine, libidinous lounge lizards provide appealing eye candy at first, at least until their incessant droning makes you want Stuntman Mike, or anyone for that matter, to reach for some duct tape or, perhaps, a Louisville Slugger. 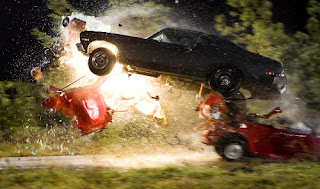 We have not screened the other full-length component of GRINDHOUSE, but it appears that Rodriguez also missed the mark. Quite frankly, we doubt we will even bother trying. Instead, we plan to grab a six-pack or two of Lone Star longnecks and pop into the old VHS machine a copy of FASTER, PUSSYCAT! KILL! KILL!

Old Coot: "Women! They let 'em vote, smoke and drive -- even put 'em in pants! And what happens? A Democrat for president!"

Sorry Quentin, when it comes to the grindhouse genre, no one does it better than Russ Meyer.
Posted by Robert A. Nowotny at 6:34 AM