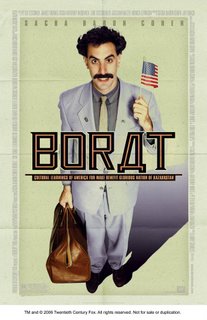 "The biggest problem we face in this country is political correctness. Everyone's being so damn careful not to offend anyone; it's a bunch of crap."

"BORAT! is nothing but a totally offensive piece of crap. I'm not going to waste my money."

The above two quotes were heard recently at lunch -- within minutes of one another. Yes, they were spoken by the same individual.

As Borat might say, some people could use a little "cultural learnings for make benefit glorious tolerance among crackers." One can only hope.

Starring Sacha Baron Cohen, BORAT! is essentially a road movie. As far from ROAD TO RIO or ROAD TO ZANZIBAR as one can possibly get, the road taken here is populated with polemic potholes, ranging from anti-Semitism, misogyny, homophobia, bigotry, racism, cultural elitism and religious fervor. Heady stuff, indeed, yet I cannot help but believe that even Bob Hope and Bing Crosby would appreciate this journey --- because while Borat Sagdiyev entertains, Sacha Baron Cohen enlightens.

Make no mistake. The improvised interactions are as subversive as they are brilliant, as inflamatory as they are informative. There's absolutely no attempt at whitewashing anything. This is NOT 20 Mule Team Borat; this is full frontal and disturbing filmmaking. And it's funny -- snarf running down the nostril funny. The kind of "funny" best shared with an audience. (At my early Monday afternoon matinee the theater was one-third full, and the biggest surprise was that I was younger than most of those in attendance. The theater reverberated with laughter. Who woulda thunk?)

My recommendation is to go see for yourself why BORAT!CULTURAL LEARNINGS OF AMERICA FOR MAKE BENEFIT GLORIOUS NATION OF KAZAKHSTAN is a box-office hit. Go on, just do it.

(Here's one hint: It has nothing to do with the fact that the title is the second longest in American cinema history -- DR. STRANGELOVE OR: HOW I LEARNED TO STOP WORRYING AND LOVE THE BOMB -- remains the record holder by one word). 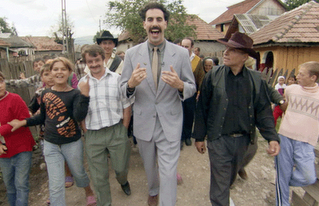 True, you may find yourself offended a time or two. So what? Perhaps David Edwards of the Daily Mirror said it best: "The least politically-correct film since THE TRIUMPH OF THE WILL."