A surprising number of film critics have called LITTLE MISS SUNSHINE "a gem." If it is, it's tourmaline.

Don't get me wrong, LITTLE MISS SUNSHINE isn't a bad movie by any means, but it isn't all that good either. At best, it is mediocre. Some made-for-television movies are better, even ones made in Bulgaria. Coming in at approximately $8 million (about 1/4 the average made-for-TV budget), one has to wonder where the money went.

How an overhyped, glorified sitcom received four Oscar nominations can only be explained as yet another case of the Academy Selection Committee having their heads shoved up where the sun doesn't shine -- and this is by no means a LITTLE MISS on their part, it is a big one. SUNSHINE's inclusion in the Best Picture category cheats at least two dozen more worthy efforts. The same can be said for the two supporting actor nominations and, to a lesser extent, the one for screenwriting.

Directed by the husband-wife team of Jonathan Dayton and Valerie Faris, whose previous directorial efforts consisted primarily of music videos and television commercials, LITTLE MISS SUNSHINE is the tale of a dysfunctional family on the road in search of self-realization. While there are a number of amusing moments, the film never approaches Griswoldian proportions, and so this journey from Albuquerque to Redondo Beach is overly long, predictable and only modestly amusing.

To his credit, screenwriter Michael Arndt examines the prevailaing American belief that "everyone must be a winner." Richard Hoover, played with indifference by Greg Kinnear, is the obsessive father trying to make a living as a self-help guru with a "9-Step Refuse To Lose Program." His compulsive preoccupation with winning drives everyone crazy. It's a good thing that "Red" Klotz is nowhere to be seen -- his Washington Generals being the epitome of all that Richard disdains.

Alan Arkin, as Grandpa Hoover, steals every scene he is in; too bad he dies half-way through the movie. His entertaining performance garnered him a Best Supporting Actor nomination, but it is hardly deserved. I cannot help but think this is a case of Hollywood wanting once more to simply pat an old, well-liked geezer on the back. Having said this, Arkin's nomination is far more deserving than that of Abigail Breslin, the young girl whose dream is to become a beauty queen. Again, little Ms. Breslin isn't necessarily bad, but her frumpy role as Olive Hoover is a long way from being Oscar-worthy. I have to believe the Academy members were drinking something far stronger than Shirley Temples when they made this indefensible decision.

Surprisingly, the final scenes at the "Little Miss Sunshine Pageant" are as frightening as anything George Romero has brought to the screen. All the contestants, except Olive, are JonBennet Ramsey clones. Creepy lilliputian beauty queen wannabees parading in besequinned gowns and Princis Di chapeaus, their tiny faces adorned with fluttering false eyelashes, heavily mascaraed eyes and cherry-red lips morphing these parading pint-sized little pixies into living and breathing Tinkerbells from Hell. It's a chilling indictment of misguided glitz, glamour and the pursuit of glory -- for these little glowworms simply being human isn't enough any more.
Posted by Robert A. Nowotny at 10:42 AM 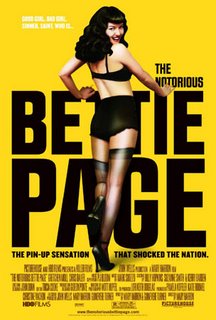 THE NOTORIOUS BETTIE PAGE is a loving, beautifully crafted biography of "The Pinup Sensation That Shocked A Nation." There's cheesecake to be sure, but director Mary Harron and Co-Screenwriter Guinevere Turner also give us angel food, lots of angel food.

Blessed with an infectious smile, sparkling eyes, fetching figure and an inherent innocence that no one (not even Marilyn Monroe) possessed, the real-life Bettie was certainly one of a kind. And while the black leather, garter belts and seamed stockings put a little boop-oop-a-doop in many a gentleman's fetish fantasies, flesh-and-blood Bettie always came across as wholesome, uninhibited and far more playful than pornographic. Even her bedevilling bondage photos showed restraint -- pun intended.

Gretchen Mol is fantastic in the title role. It is inconceivable that any other actress could have so perfectly portrayed the saucy, deeply religious, effervescent Bettie. The supporting cast is excellent as well, particularly Chris Bauer as Irving Klaw and Lili Taylor as Paula Klaw, the brother-sister team that made this "kitten with a whip" world famous. The use of "glorious black & white" for all of the New York scenes evokes just the right feel for the period, and the seamless integration of period stock footage adds a high degree of production value. Likewise, the supersaturated color footage used when the location shifts to Miami is remarkably effective and unobtrusive. 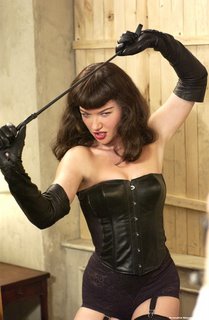 There are always comparisons to ponder. Wilma or Betty? Buffy or Xena? Norma Rae or Bettie Page? For my money its Betty, Xena and Ms. Page.

Thirty lashes anyone? Count me in...
Posted by Robert A. Nowotny at 8:16 AM 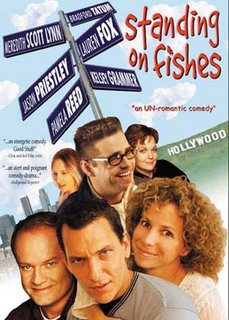 It is only mid-January and we already have a strong candidate for the 2007 Schiavo Award presented annually by Needtovent.com to the most brain dead movie of the year.

STANDING ON FISHES is so inherently bad even the Law Firm of James Sokolove can't defend it. Starting with a script thinner than a Republican's lips, this self-indulgent vanity piece is about as well-executed as an Iraqi hanging thanks to the universally shoddy production values throughout.

Starring Meredith Scott Lynn (who also directed and produced) and Bradford Tatum (credited with co-directing and writing the contrived, progressively verbose and irritating screenplay), the film was completed in 1999, finally picked up for limited distribution in 2003, released the following year and was just now discovered under a pile of dust on the shelf of a local Blockbuster. It was no surprise that STANDING ON FISHES is bad, but being this bad abuses the privilege.

Tatum plays a serious sculpter who has taken on the assignment of crafting a rubber pussy for a film being directed by Grammer. Apparently Sharon Stone wasn't available, and so Grammer needs this devilish device since the actress he's directing won't flash her flesh. Lynn is Tatum's high-strung, petulant girlfriend from Hell (the San Fernando Valley actually -- pretty much one and the same) who finds the plastic prosthesis disgusting. In fact, Lynn finds just about everything disgusting. Her incessant complaining makes the average KB Home buyer seem docile.

Here's where Man Law should have taken over -- no scrawny, skinny assed harpy with tits that look like fried eggs has the right to be high maintenance. End of story.

The one supposedly memorable comedic scene finds Kelsey Grammer brazenly sniffing the fake twat in an exclusive restaurant. We say: "Snot funny, McGee!" We wonder what Lilith would say...
Posted by Robert A. Nowotny at 8:24 AM 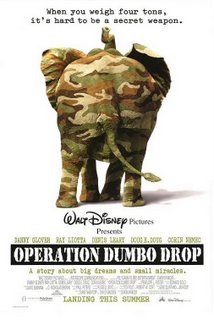 No, OPERATION DUMBO DROP is not a film about Terrell Owens, although the title would certainly be appropriate. Rather, this Disney release is one of the most misguided family flicks to come down the pike since toe-tapping triumphed over goose-stepping in SWING KIDS (yet another Disney misfire). With Walt long gone Mouseschwitz ain't what she used to be.

In this particular case Producers Diane Nabatoff and David Madden, in typical Hollywood copycat fashion, decided to develop a project that would emulate the success of FREE WILLY. After all, why not? Clearly the tale of a whale had proven to be a box office bonanza and so the search was on for some other living leviathan to be cast in a live-action, leading role.

Supposedly "inspired by a true story," OPERATION DUMBO DROP stars Ray Liotta as a Green Beret captain assigned to take over reconnaissance duties at a Montagnard village within spitting distance of the Ho Chi Minh Trail. He is replacing Danny Glover who has blended in well with the Vietnamese culture but is anxious to retire to the life of a roofing contractor back in the states. While both are on a scouting mission a Nestle Crunch candy wrapper is found by a North Vietnamese patrol betraying the Yanks' pressence. The village elephant is shot in retaliation.

Even though the brutal execution of their beloved elephant was carried out by a reluctant North Vietnamese army officer in front of the entire village, blame is angrily placed toward the Americans. With the locals clearly ready to change allegiance, Glover and Liotta take it upon themselves to find a replacement and re-establish the village's tenuous loyality.

Assisting in this daunting task is Denis Leary as the ultimate procurement specialist whose ingenuity marks the film's best moments and Doug E. Doug as a superstitious short-timer.

Two military transport planes, a delapidated boat, one broken-down truck and ninety boring minutes later the climatic ending is reached as Bo Tat is parachuted safely to the village and all ends well.

Directed with precious little energy by Simon Wincer (his PHAR LAP and FREE WILLY are both better movies), the film's strongest points are the pulsating sixties soundtrack, some impressive cinematography by Russell Boyd and the natural beauty of Thailand where filming actually took place. As for the acting, let's just say that Glover and Liotta paint their characters by number, Doug E. Doug thinks he's Buckwheat at age 20 and Denis Leary is as wasted as Timothy Leary.

Save your time and money: there's no need to rent OPERATION DUMBO DROP when you can observe the real thing for free every weekday morning at the Bulverde Middle School.

(For those needing directions, simply follow the trail of Nestle Crunch and other candy wrappers. Bulverde Middle School is just ahead...)
Posted by Robert A. Nowotny at 11:17 AM

YOU, ME AND DUPREE 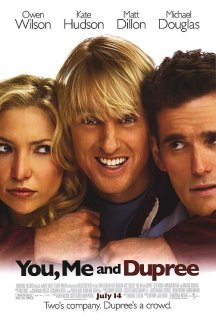 It is a mere ten hours since I watched YOU, ME AND DUPREE and I honestly cannot remember the film at all. Thankfully I still have before me the DVD box and so I am able to piece together a smidgen of what I apparently saw. Talk about a total waste of one hundred and eight minutes. It isn't so much that this film is bad, it is worse than bad, it is even worse than really, really bad.

In fact, it is so totally forgettable an experience one would think that Dr. Alois Alzheimer directed.

Alas, the blame must go instead to Anthony Russo and Joe Russo, bumptiously bungling brothers whose previous credits were primarily confined to the small screen, and writer Michael LeSieur, who has no previous writing credit of any kind. Let's hope someone takes away his Big Chief Notebook Tablet.

Assisting the above-mentioned talentless trifecta are Owen Wilson, Kate Hudson, Matt Dillon, Michael Douglas and an uncredited Moose Head. Between you, me and the gatepost none of them should have signed on, although the Moose Head does hold his own compared to Mr. Douglas' embalmed performance.

Kate and Matt play newlyweds. Unfortunately, the chemistry between them is as inert as a placebo. This should be no surprise since Matt Dillon's range as a performer is more wooden than Charlie McCarthy. At least Kate appears to try, going so far as to attempt physical humor. Unfortunately, her pratfall falls as flat as her chest.

This leaves Owen Wilson who plays the title character, Randy Dupree, the we-are-supposed-to-adore-down-and-out-slacker who crashes on the newlywed's couch and serves as the source of the mishaps that follow. Randy does have one scene true to his name -- a supposed loping of his mule which was clearly intended to be the comedic highlight of the film. Instead, Gus, Cupcake, Ruth, Blue, the Borax boys and Francis are talking lawsuit.

And you thought Owen Wilson's nose was already bent out of shape.
Posted by Robert A. Nowotny at 6:43 AM