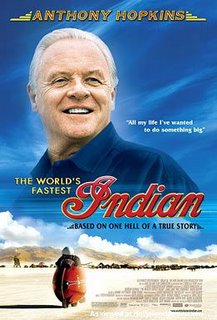 If ever there was a titularly-challenged movie THE WORLD'S FASTEST INDIAN is it. No, this superb, subtly inspirational film isn't a Biograph biopic about the legendary Jim Thorpe, nor is it a Bollywood sports film featuring a Mumbaian marathoner, nor is it a zany Zucker Brothers comedy about Tonto with a hotfoot.

Simply put, this is a marvelous, unforgettable film about the indomitable human spirit found in an unlikely place, and I don't mean the football stadium at Notre Dame University.

As in Burt Munro, by all standards a fine fellow in his Golden Years who should be lounging poolside at some retirement community in Auckland reliving the thrilling days of yesteryear. But this Lone Ranger is a likeable, lively, spirited son-of-a-gun with a passion to go fast and a deep rooted love for an Indian -- a 1920 American-made Indian motorcycle to be precise -- that he has lovingly ridden, restored and modified over a period of forty years in an attempt to set a world speed record.

Burt's obsession is brilliantly revealed early in the film when the camera dollies past a long shelf holding a lifetime of broken pistons and other failed, hand-crafted parts that belie the mettle of this man. "Offerings to the God of Speed" the neatly printed words below proclaim, and it becomes abundantly clear that the Achilles' heel in his virtually insurmountable pursuit lies in the flawed aluminum alloy alchemy which takes place in a small corrugated tin shed that serves as a laboratory and a garage and a home.

Yes, he's an underdog of epic proportions, but Burt knows something most AARP members have long forgotten, "If you don't follow through on your dreams, you might as well be a vegetable." It's true, folks past sixty can still have dreams. And skills. And as Burt can attest, sexagenarians can have sex as well.

Anthony Hopkins is cast as Burt Munro and his endearing performance is as engaging and heartfelt and utterly charming as he has ever given. Unlike the diamond in my wife's wedding ring, Hopkins is flawless. Yes, I said flawless.

Written and Directed by Roger Donaldson (NO WAY OUT, SPECIES, DANTE'S PEAK, THE RECRUIT), it is clearly evident that he admires and respects Mr. Munro given the film's virtually consummate execution, especially the exhilarating cinematography by David Gribble and the skillful editing by John Gilbert. Everything considered, this is by far Donaldson's best film to date.

Of course, just getting from Invercargill, New Zealand to the Bonneville Salt Flats in Utah proves to be a daunting task. This is especially true since Burt is near penniless and suffers from a weak heart. Luckily there is help along the way. Diane Ladd, Saginaw Grant, Paul Rodriguez, Chris Williams and Chris Lawford are just a few of the fine actors whose oddball, eclectic and surprising array of quirky characters assist Munro in his seemingly impossible quest.

Burt soon discovers that Bonneville presents additional, unsuspected obstacles. Welcome, Burt, to the Mormon Mecca for Speed where dreams of conquest dissipate as ethereally and as often as Fata Morgana.

But Burt's accomplishment was no mirage. It was damn near a miracle.

They say fame is fleeting, but this doesn't apply to an old geezer named Burt Munro who was clocked at over 200 miles per hour in a clunky contraption, man and machine as one, the rickety relic and the cantankerous old Kiwi solidly establishing a world's speed record that still stands today, almost thirty years later.

Fittingly, for his stunning achievement the little town of Invercargill changed its official motto from "City of Water and Light" to "Where Dreams Come True." An appropriate tribute, indeed, to an inspiring individual the God of Speed took a liking to, just as you will when you see THE WORLD'S FASTEST INDIAN.
Posted by Robert A. Nowotny at 8:53 AM