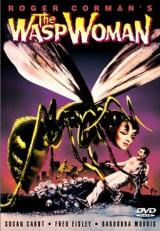 I initially thought THE WASP WOMAN was a bio-pix about Hillary Clinton. But it isn't.

Then I wondered if it might be the life story about some lesser-known "White Anglo-Saxon Protestant" female -- perhaps the honey-blonde hymenoptera haranguer who attacked a recent subdivision POA Board Meeting. (You know who you are.) Wrong again.

Alas, this "Wasp Woman" is none other than slinky Susan Cabot in her final film role. Written and directed by the King of Kitch, Roger Corman, some critics have hailed THE WASP WOMAN as the first feminist horror film. That's a bit of an overstatement, although the idea of any woman (even in reel life back in 1960) heading a multi-million dollar empire with unbridled determination and guile was as rare as a jet-black Jujube.

The opening twelve minutes focuses entirely on bees -- not wasps. We see beehives and beekeepers. We see real bees, not the colored Styrofoam pellets Irwin Allen tossed in THE SWARM (1978). There's nary a wasp anywhere -- neither the insect nor the female human variety.

It almost begs the question: Is this B movie a bee movie -- title notwithstanding?

Fear not, eventually the bees are relegated to simply being extras when it is discovered that the royal jelly of a queen wasp has greater rejuvenating powers than that of a queen bee. Dr. Eric Zinthrop's laboratory now contains more wasps than the Republican National Convention. This research is fully funded by Cabot with the promise of her becoming young again and wrinkle-free, not to mention the millions upon millions to be made by her company marketing a cosmetic line that reinstates a woman's youth. Of course, Ms. Cabot ultimately overdoses on "jelly injections" and finds herself turning into a giant wasp who eats men alive. For the record, she does attack her secretary, but the deed isn't consummated. (We'll refrain from the cheap lesbian/wasp joke that you were expecting. Admit it, you're surprised.)

Recently re-released on DVD by Digiview Entertainment, THE WASP WOMAN is paired with THIS IS NOT A TEST, KILLERS FROM SPACE and UNKNOWN WORLD to provide 330 minutes of B-grade sci-fi fun. It arrives just in time considering the WGA strike is in full force and re-runs reign the airwaves.

(THE WASP WOMAN is a quintessential example of what is commonly called a B movie. One of our favorite definitions of a B movie is that it is a film where the sets shake when an actor slams a door. We didn't know that Joe Grosso once worked in L.A.)
Posted by Robert A. Nowotny at 6:46 AM